Cassava Plant Care – Information On How To Grow Cassavas 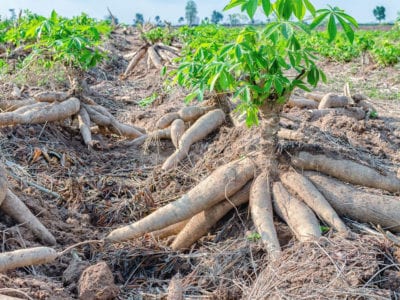 As the bard says, “What’s in a name?” There is an important distinction in the spelling and meaning of many similar words. Take for instance, yucca and yuca. These are both plants but one has agricultural and nutritional significance, while the other is an ornery, desert dwelling organism. The lack of a “c” in one name highlights just one difference between yucca and yuca.

Read on to find out why yuca, or cassava, is a global food source and important economic crop.

Are Yucca and Cassava the Same?

Yuccas are flowering, perennial plants which have remarkable tolerance to dry, arid regions. They are in the lily or agave family and generally grow as rosettes of spiky leaves that spring from a central stubby trunk. Ancient civilizations and more modern native populations eat the roots of the yucca. This is one of the similarities the plant has with cassava.

Cassava (Manihot esculenta) is also known as yuca and is an important plant for its starchy roots. These contain 30 percent starch and are high in carbohydrates. Cassava roots are prepared and eaten like potatoes. Cassava originated in Brazil and Paraguay, but now many other nations are learning how to grow cassavas.

So are yucca and cassava the same plant? They are not even related and prefer different growing climates. The only similarities are the close name and use of roots as a food source.

How to Grow Cassavas

The plant prefers well-drained soil and modest rainfall, but it can survive where soils are wet. Cassava roots do not tolerate freezing temperatures and the best growth is in full sun.

Growing cassava yuca from start to harvest can take up to 18 months. The plants are started from propagules made from parts of mature stems. These are 2 to 3 inch (5 to 7.6 cm.) cuttings with several bud nodes along the length. Lay the cutting on prepared soil in a pot and keep lightly misted in a sunny location.

Grow the cuttings indoors until temperatures outside are at least 70 degrees F. (21 C.). Transplant them outside when the cuttings have sprouted and have at least 2 inches (5 cm.) of growth.