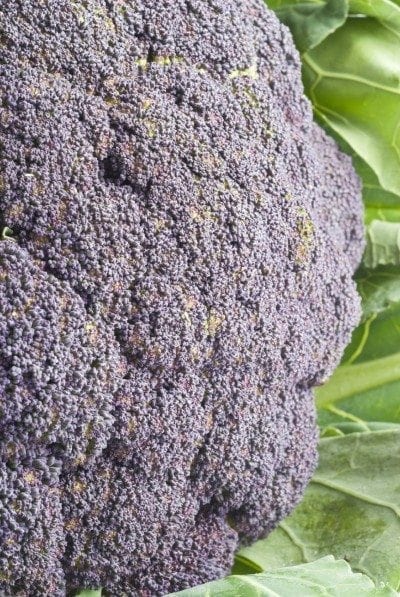 Cauliflower is a member of the Brassica family grown for its head or curd, which is composed of a cluster of flowers. The head is most often pure white to a slight cream in color, but what if there is a purple tint on cauliflower? Is it safe to eat purple cauliflower?

It happened to me the first time I grew cauliflower in my home garden; my cauliflower turned purple. It was my first foray into vegetable growing, about 20 years or more ago. Everything was an experiment.

The Internet was more or less non-existent, so I often relied on my mother or aunt to clue me in on gardening problems and possible solutions. Thankfully, they told me this purple tint on cauliflower was not a disease, fungus or pest.

Cauliflower is a cool weather veggie which thrives in the cool temperatures of spring and fall. As mentioned, it is grown for its whitish to cream-colored head or curd. But cauliflower naturally has a range of colors, even tending towards purple, yellow, red or blue tints. This purple color in cauliflower is caused by the presence of anthocyanin, which is exacerbated by sun exposure. It is a harmless water soluble pigment found in colorful foods such as grapes, plums, berries, red cabbage and eggplant. Certain varieties, such as ‘Snow Crown,’ have a stronger propensity for a purple color in cauliflower heads.

To prevent growing cauliflower that has a purple tinge to it, purchase a self-blanching variety which has been developed to reduce problems with curd tinting, or blanch or cover the head as it is developing. Also, schedule the maturation of the cauliflower for cooler months such as September and October.

Lengthy, hot summer days will cause a purple color in cauliflower heads; you may even see leaves sprouting out of the curd. If this has already happened, there’s nothing to be done about it except to take note for next year’s crop. To blanch a cauliflower head, tie the outer leaves over the developing curd when it is 2 inches (5 cm.) across, securing them with a clip or gardening twine. The leaves will shield the developing curd from the sun and allow it to maintain its whitish coloration.

Planting time for cauliflower is also an important consideration to avoid the formation of purplish curds. Cauliflower needs daytime temps of between 70-85 F. (21-29 C.) but with an early enough start time for a long enough growing season to support maturation of a large head. If you plant too early, however, a late season frost can kill the young cauliflower. You may need to look for early maturing or late maturing varieties, depending on the climate in your area and the length of your growing season. The earliest varieties mature in just 60 days and, in some regions, you can get an early harvest and then replant in June for a fall harvest.

Is It Safe to Eat Purple Cauliflower?

If it’s too late and the cauliflower curd is already tinged purple, don’t despair. Purple cauliflower is perfectly safe to eat. It may have a bit of an “off” flavor and, as such, you may want to use it raw; cooking it will only increase the “off” flavor. Heating the purplish florets will also change the color from purple to gray or slate blue, especially if your water is hard or has an alkaline pH — not the most appetizing hues. If you can’t stand raw cauliflower and want to cook it, add a bit of vinegar or cream of tartar (tartaric acid) to the water to minimize the color change.