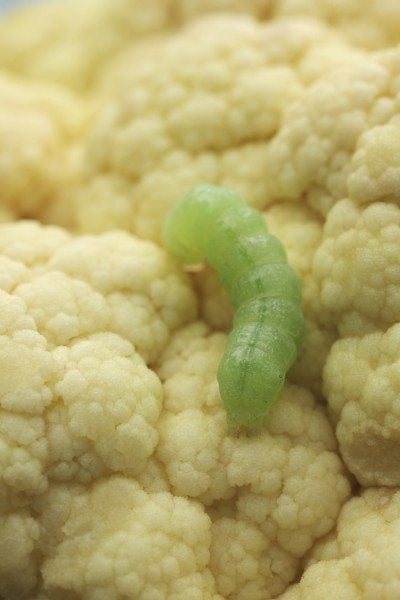 One of the most popular crop groups are the crucifers. These encompass leafy vegetables such as kale and cabbage, and flowering species like broccoli and cauliflower. Each has specific pest problems which may become issues of concern in some regions more than others. Cauliflower bugs can decimate the crop and make the flower head unfit to eat. Treating bugs on cauliflower starts with correct identification of the pest and a targeted control plan that is non-toxic and safe for food plants.

Cauliflower is a versatile vegetable, delicious either cooked or raw. Common signs of an insect invasion may be holes in leaves, tracks on foliage, missing vegetation and poor vigor. Some of the larger insect pests are easy to detect but others are too small or only come out at night, and diagnosis can pose a problem. Knowing the most common cauliflower pests is a good start to vetting the problem and annihilating these annoying and destructive bugs on cauliflower plants. The most common cauliflower pests are aphids, flea beetles, slugs and snails, leaf hoppers, and several insect larva.

The one pest that is familiar to most gardeners is the aphid. These are small, soft bodied flying bugs that reduce plant health by sucking sap from leaves and stems. They also attack the succulent flower, covering it in their sticky honeydew secretion and stunting the growth of all parts of the plant. Ants may indicate their presence, since ants “farm” aphids for their honeydew.

The harlequin bug is another sucking insect. Both the adult and larval stages feed on plant sap and cause foliar death. The insect is 3/8 inches (1 cm.) long, shield shaped and has distinctive red and black spots on its back. Insecticidal soap or oil is often used in controlling these cauliflower insects.

Whatever the name, the larva of many insects and moths are the most destructive cauliflower bugs.

Many parasitic wasps and Bacillus thuringiensis are useful to combat these pests.

Other Bugs on Cauliflower Plants

Slug and snail damage are characteristic with holes and slimy trails over the foliage. Pick off the pests at night or use diatomaceous earth for controlling cauliflower insects such as these.

Another insect that can be repelled by diatomaceous earth is the flea beetle. The small bronze to black beetle leaves holes in foliage while its larva feed on young plant roots.

Blister beetles are 3/8 inch (1 cm.) long and gray. They chew holes in leaves causing foliar death. Use pyrethrum and cultivate in spring to kill the larva.

The yellow margined leaf beetle has wings bordered by gold, but its attractive appearance belies its danger to crops. Adults and larva eat the leaves of cauliflower.

Use non-toxic safe methods for treating bugs in cauliflower to preserve the crop and retain its safety for eating. In addition to diatomaceous earth, horticultural oils and soaps and hand picking, the natural bacteria Bacillus thuringiensis is an excellent control. You may also purchase natural enemies in the form of beneficial nematodes and wasps.