Choko Not Flowering: When Does Chayote Bloom 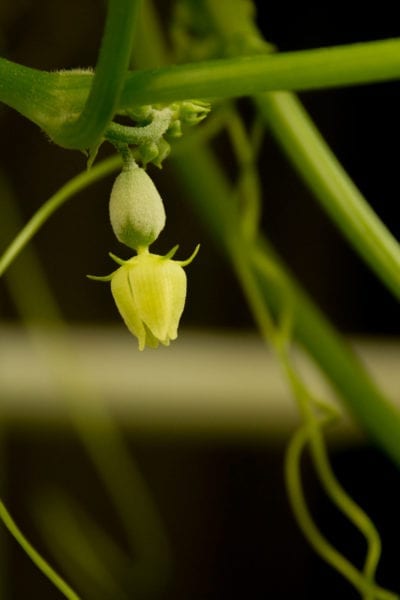 When Does Chayote Bloom?

If this is your first time growing chayote, maybe it just hasn’t matured enough to flower. When does a chayote bloom? Chayote vines flower in late summer to early fall (August or September) and should be flooded with fruit by autumn (September or October).

Chayote is a cucurbit and, like all cucurbits, produces both male and female blooms on the same plant. This is great because the vines are such prodigious producers that a single plant is enough for most families.

The flowers grow in inflorescences with groups of male blooms and a single or pair of female blooms. The blossoms are small, white to light green and are not particularly noticeable. In fact, their inconspicuous nature could be one reason you don’t see any flowers on the chayote.

Chayote thrives in areas where summer temperatures are warm to hot – tropical to subtropical regions. It requires 120-150 frost free, warm days to produce. It is possible that temperatures in your area got too cold and the blooms were killed off.

Another need of the choko is about 12 hours of sun to flower. While chayote can be grown in temperate climates for use as a rapid growing vine, it is not likely to flower or fruit.

Now that you know the most common reasons for a chayote plant not flowering, you will be better equipped in dealing with this issue. If the plant is not yet mature, you’ll simply need to be patient. With the blooms being so small, you’ll simply need to be more watchful in order to see them. If your plant isn’t getting enough light, you’ll need to move it to a location with more sun. And, if you’re in a cooler region, you’ll need to protect the plant from frost.