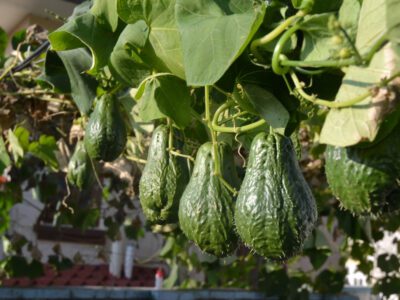 Chayote plants (Sechium edule) are a member of the Cucurbitaceae family, which includes cucumbers and squash. Also known as vegetable pear, mirliton, choko, and custard marrow, chayote plants are native to Latin America, specifically southern Mexico and Guatemala. Growing chayote has been cultivated since pre-Columbian times. Today, the plants are also grown in Louisiana, Florida, and the southwestern United States, although most of what we consume is grown and then imported from Costa Rica and Puerto Rico.

Chayote, as mentioned above, is a cucurbit, namely a squash vegetable. The fruit, stems, young leaves, and even the tubers are eaten either steamed or boiled in stews, baby food, juices, sauces, and pasta dishes. Popular in Central and South American countries, chayote squash was introduced into the Antilles and South America between the eighteenth and nineteenth centuries with the first botanical mention in 1756.

Primarily used for human consumption, the stems of chayote squash are also used to make baskets and hats. In India, the squash is used for fodder as well as human food. Infusions of growing chayote leaves have been used to treat kidney stones, arteriosclerosis, and hypertension.

The fruit of chayote plants is light green with smooth skin, pear shaped, and low in calories with a fair amount of potassium. Chayote squash is available from October through March, although due to its increased popularity, more stores are carrying it year-round. Choose evenly hued fruit free of blemishes and then store the fruit in a plastic bag in the fridge for up to a month.

How to Grow Chayote

The fruit of chayote plants is cold sensitive but can be grown as far north as USDA growing zone 7 and will overwinter in zones 8 and warmer by cutting the vine back to ground level and heavily mulching. In its native climate, chayote bears fruit for several months, but here it doesn’t flower until the first week of September. A 30-day period of frost free weather is then needed to achieve fruit.

Chayote can be sprouted from fruit purchased at the supermarket. Just choose unblemished fruit that are mature, and then lay it on its side in a 1 gallon (4 L.) pot of soil with the stem up at a 45-degree angle. The pot should be placed in a sunny area with temps from 80 to 85 degrees F. (27-29 C.) with occasional watering. Once three to four leaf sets develop, pinch the tip of the runner to create a branch.

Prepare a hill with a mix of 20 pounds (9 kg.) of manure and soil in a 4 x 4 foot (1 x 1 m.) area of full sun. If your soil tends towards heavy clay, mix in compost. In zones 9 and 10, choose a site that will protect the chayote from drying winds and that will provide afternoon shade. Transplant after the danger of frost has passed. Space plants 8 to 10 feet (2-3 m.) apart and provide a trellis or fence to support the vines. Old perennial vines have been known to grow 30 feet (9 m.) in a season.

Water the plants deeply every 10 to 14 days and and dose with fish emulsion every two to three weeks. If you live in a rainy region, top dress the hill with manure or compost. Chayote is very susceptible to rotting, in fact, when attempting to sprout the fruit it’s best to moisten the potting media once and then not again until the sprout emerges.

Chayote is susceptible to the same insect attacks that afflict other squash. Insecticidal soap or neem application can control insects, including whiteflies.

Use gloves when peeling and preparing chayote as the sap may cause skin irritation.