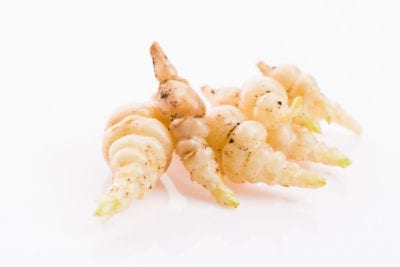 Today, crosnes (or chorogi) can be found in specialty gourmet shops and high-end restaurants with a price to match, but you can also grow your own. Read on to learn how to grow and when to harvest Chinese artichokes.

What are Chinese Artichokes?

The Chinese artichoke plant (Stachys affinis) is a perennial root vegetable found in the mint family. Like mint plants, Chinese artichoke have a propensity to grow wantonly and can easily overtake a garden area.

They have foliage that looks much akin to the leaves of spearmint on low growing plants hardy to zone 5. Used both as a culinary herb and medicinal plant, most Chinese artichoke growing is done for the delicious tubers, which can be eaten fresh or cooked and have a nutty flavor similar to water chestnut or jicama.

In mid to late summer, the tiny plants are decorated with lovely pink to mauve flower spikes.

How to Grow Chinese Artichokes

Chinese artichoke plants are cultivated for the small tubers they produce, called crosnes, which have become somewhat of a culinary sensation. These tubers are time consuming to harvest and have a very short shelf life once dug up, which contributes to their rarity and high price.

Despite their healthy price tag, crosnes have a multitude of uses. They can be eaten fresh out of hand like a carrot, tossed into salads, or cooked in soups, stir fried, sautéed, or steamed.

Luckily, Chinese artichoke growing is a simple matter. The plants prefer well-draining soil in full sun. The soil should, however, be kept moist and mulched. Due to its invasive tendencies, plant Chinese artichoke in an area away from other plants. Spring is a good time for planting the tubers.

When to Harvest Chinese Artichoke

Chinese artichoke plants take about five to seven months to develop tubers. They are ready to harvest anytime during the fall and winter when the plant is dormant.

The top growth may be killed back by frost, but the tubers themselves are quite hardy and can be left underground for later harvest. Lift the tubers as you would potatoes. It is almost impossible to find all the tubers but any left behind will grow the successive season.

Chinese artichoke growing is extremely simple and, because the plant is a perennial, will provide the gardener with years of delicious tubers. Although it can be invasive, at the time of harvest, the plant’s size can be retarded by simply pulling it up.