What Is A Jicama: Jicama Nutritional Information And Uses 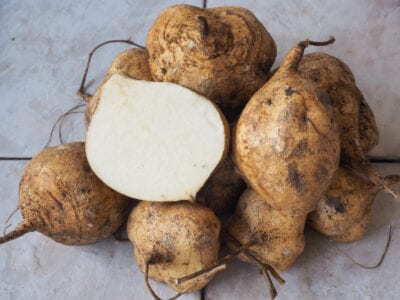 Also known as Mexican turnip or Mexican potato, Jicama is a crunchy, starchy root eaten raw or cooked and now commonly found in most supermarkets. Delicious when sliced raw into salads or, as in Mexico, marinated in lime and other spices (often chili powder) and served as a condiment, uses for jicama abound.

What is a Jicama?

Okay, but what is a Jicama? In Spanish “jicama” refers to any edible root. Although sometimes referred to as a yam bean, jicama (Pachyrhizus erosus) is unrelated to the true yam and tastes unlike that tuber.

Jicama growing occurs under a climbing legume plant, which has extremely long and large tuberous roots. These tap roots may each get 6 to 8 feet (2 m.) within five months and weigh over 50 pounds with vines reaching lengths of up to 20 feet (6 m.) long. Jicama grows in frost free climates.

The leaves of jicama plants are trifoliate and inedible. The true prize is the gigantic taproot, which is harvested within the first year. Jicama growing plants have green lima bean-shaped pods and bear clusters of white flowers 8 to 12 inches (20-31 cm.) in length. Only the tap root is edible; the leaves, stems, pods, and seeds are toxic and should be discarded.

Naturally low in calories at 25 calories per ½ cup serving, jicama is also fat free, low in sodium, and a superb source of Vitamin C with one serving of raw jicama supplying 20 percent of recommended daily value. Jicama is also a great source of fiber, providing 3 grams per serving.

Jicama growing has been practiced in Central America for centuries. It is valued for its mildly sweet taproot, which is similar in crunch and taste to a water chestnut crossed with an apple. The tough exterior brown peel is pared away, leaving a white, round root that is used as mentioned above– as a crunchy salad additive or marinated as a condiment.

Asian cooks may substitute jicama for water chestnut in their recipes, either cooked in a wok or sautéed. An extremely popular vegetable in Mexico, jicama is sometimes served raw with a bit of oil, paprika, and other flavors.

In Mexico, other uses for jicama include its use as one of the elements for “The Festival of the Dead” celebrated on November 1, when jicama dolls are cut from paper. Other foods recognized during this festival are sugarcane, tangerines, and peanuts.

From the family Fabaceae, or legume family, jicama is commercially grown in Puerto Rico, Hawaii, and Mexico and warmer areas of the southwest United States. There are two main varieties: Pachyrhizus erosus and a larger rooted variety called P. tuberosus, which are only differentiated by the size of their tubers.

Generally planted from seeds, jicama does best in warm climates with a medium amount of rain. The plant is sensitive to frost. If planted from seed, the roots require about five to nine months of growth before harvest. When started from whole, small roots only three months are needed to produce mature roots. Removal of the flowers has been shown to increase the yield of the jicama plant.