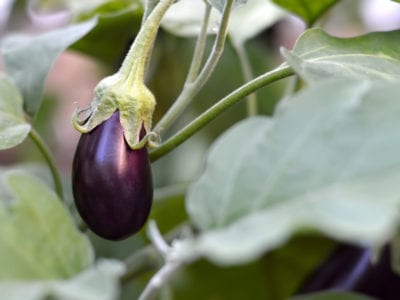 On seedlings, phomopsis blight of eggplant causes dark brown lesions, just above the soil line. As the disease develops, the lesions turn gray, and the stems eventually collapse and the plant dies.

Blight in eggplants on established plants is evidenced by gray or brown, oval or round spots on the leaves and stems. The center of the spots lightens in color, and you can see circles of small black, pimple-like dots that are actually the fruiting bodies, or spores.

On fruit, phomopsis blight of eggplant begins with pale, sunken spots that may eventually take over the entire fruit. Tiny, black spots are visible in abundance.

The tiny black spores of phomopsis blight live in the soil and spread quickly by rain splashing and overhead irrigation. Phomopsis also spreads easily on contaminated equipment. The disease is particularly favored by hot, damp weather conditions. Optimum temperatures for spread of disease is 84 to 90 degrees F. (29-32 C.).

Water early in the day to allow foliage and fruit to dry before evening.

Various fungicides may be helpful when used with the above methods of control. Spray at fruit set and repeat every ten days to two weeks until the eggplants are nearly mature. Experts at your local cooperative extension office can advise you about the best products and specific uses for your area.