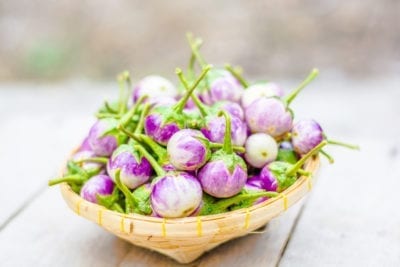 As the name suggests, Indian eggplants are native to the warm climate of India, where they grow wild. In recent years, the small egg-shaped veggies, also known as baby eggplants, have become highly desired for their mild sweet flavor and creamy texture. The good news is that growing Indian eggplants isn’t difficult, and is much the same as growing other varieties.

The easiest way to begin growing Indian eggplant is to purchase young plants in spring. You can also start seeds indoors six to nine weeks ahead of time. Indian eggplant is a tropical plant and doesn’t tolerate cold temperatures. Don’t move plants outdoors until all danger of frost has passed and daytime temperatures are at least 65 F. (18 C.).

Indian eggplant likes fertile, well-drained soil. Dig in a generous amount of compost, well-rotted manure or other organic material before planting. Mulch the plants well to keep the soil moist and discourage growth of weeds.

Indian eggplant is a heavy feeder. Apply a balanced fertilizer at planting time, and again shortly after fruit appears.

Weed around eggplants frequently, as weeds will rob moisture and nutrients from the plants.