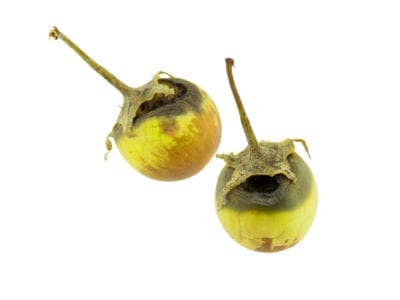 Blossom end rot is in eggplant is a common disorder also found in other members of the family Solanaceae, such as tomatoes and peppers, and less commonly in cucurbits. What exactly causes a rotten bottom in eggplants and is there a way to prevent eggplant blossom rot?

What is Eggplant Blossom Rot?

BER, or blossom end rot, can be extremely damaging, but at first it may not be very noticeable. As it progresses, it becomes obvious as your eggplants are turning black on end. First, though, the symptoms of BER begin as a small water-soaked area at the blossom end (bottom) of the fruit and can occur when the fruit is still green or during the ripening phase.

Soon lesions develop and get larger, becoming sunken, black, and leathery to the touch. The lesion may only appear as a rotten bottom in the eggplants or it may cover the entire lower half of the eggplant and even extend into the fruit.

BER may afflict fruit, causing eggplants with rotting bottoms, at any time during the growing season, but the first fruits produced are usually the most affected. Secondary pathogens may use the BER as a gateway and further infect the eggplant.

Causes of Eggplant with Rotting Bottoms

Blossom end rot isn’t a disease caused by fungi or bacteria, but is instead a physiological disorder caused by a calcium deficiency in the fruit. Calcium is of paramount importance as the glue which holds cells together, as well as essential for nutrient absorption. Normal cell growth is dictated by the presence of calcium.

When fruit is lacking in calcium, its tissue breaks down as it grows, creating eggplants with rotting bottoms or blossom ends. So, when eggplants are turning black on end, it is usually the result of low calcium levels.

BER may also be caused by high amounts of sodium, ammonium, potassium and others that lessen the amount of calcium the plant can absorb. Drought stress or soil moisture fluxes in general work to influence the amount of calcium uptake and will result in eggplants that are turning black on the end.

How to Prevent Blossom End Rot in Eggplants