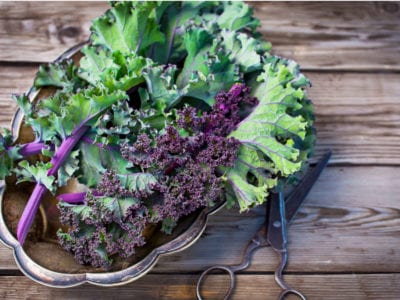 Does kale have thorns? Most gardeners would say no, yet this question occasionally pops up on gardening forums, often accompanied by photos showing prickly kale leaves. These sharp spines on kale leaves can be abrasive and they certainly don’t seem very palatable. To prevent this from happening in your garden, let’s explore some reasons why kale is prickly.

The simplest explanation for finding prickly kale leaves is the case of mistaken identity. Kale is a member of the Brassicaceae family. It’s closely related to cabbage, broccoli, and turnips. Turnip leaves are sometimes covered with prickly thorns.

From seed collection to labeling seedlings, mix-ups can and do occur. So, if you’re finding spines on kale leaves in your garden, it’s possible you might have inadvertently purchased turnip plants. The shape and frilliness of turnip leaves can closely resemble some varieties of kale.

The good news is turnip leaves are edible. They tend to be tougher than other greens, so it’s best to pick the leaves when young. Additionally, cooking softens the thorns, which makes turnip leaves palatable. Worse case, you can wait for the turnip roots to enlarge, and you’ll have the benefit of a vegetable you hadn’t expected.

Why Does Kale Have Thorns?

A more complicated explanation is that some kale is prickly, depending upon the variety. Most varieties of kale belong to the same species (Brassica oleracea) as cabbage, broccoli, and cauliflower. This species of kale produces smooth leaves. Most cases of prickly kale leaves are found on Russian or Siberian varieties.

Russian and Siberian kale belong to Brassica napus, a species which resulted from crosses between B. oleracea and Brassica rapa. Turnips, with their prickly leaves, are members of the B. rapa species.

As a result, crossbreeding between various varieties of Russian and Siberian kale can bring out this genetic trait. Many times, varieties with prickly kale leaves are present in mixed kale seed packets. The non-specified varieties in these packets can come from uncontrolled crossbreeding in the field or may be the F2 generation of smooth-leaf hybrids.

Additionally, some varieties of Russian kale are bred for ornamental purposes and may grow spines on kale leaves. Since ornamental varieties are not bred for consumption, these leaves might not have the flavor or tenderness of culinary kale.