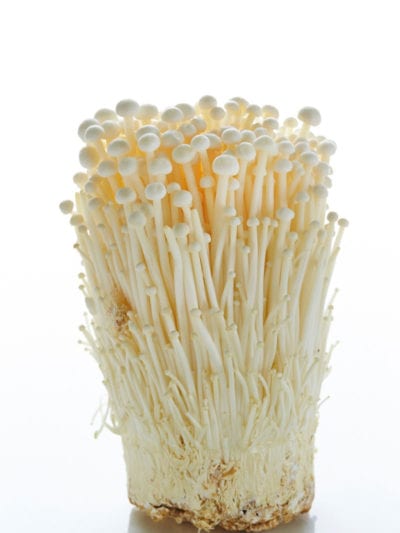 A quick search for enoki mushroom info reveals numerous common names, among them velvet stem, winter mushroom, velvet foot, and enokitake. These are very delicate fungi in an almost filament form. They are often the only mushrooms available in winter. Growing enoki mushrooms in cultivation is done in the dark, resulting in white, slender fungi.

If you like eating enoki mushrooms, you might try growing them yourself. If you want to learn how to grow enoki mushrooms, there are plenty of kits and inoculum available. Most of the items needed are easy to find and household glass containers may be used once sterilized.

Wild enoki mushrooms bear very little resemblance to cultivated forms. They grow on rotting wood, especially dead elms in woodland settings. Wild enoki have small brown caps and form clusters. When foraging, it is important to do a spore print for each mushroom collected. This is because the fungi closely resemble the deadly Galerina autumnalis.

Cultivated enoki are white and noodle-like. This is because they are grown in the dark and the stems stretch out to try and reach the light. Eating enoki mushrooms provides protein, dietary fiber, amino acids, and vitamins B1 and B2.

How to Grow Enoki Mushrooms

The first step to growing enoki mushrooms is to find spawn and growing medium. The growing medium can also be aged hardwood sawdust. Next, select glass containers and sterilize them. Mix the spawn into the medium thoroughly.

Fill the bottle with medium and store them where temperatures are 72-77 degrees F. (22- 25 C.) and humidity is very high. If you want white fungi, keep jars in a dark location; otherwise, you will get brown caps, which are still delicious.

In a couple of weeks, the mycelium should be evident. Once it has covered the medium, move jars where temps are 50-60 degrees F. (10-15 C.). This promotes the formation of the caps.

The mushroom’s slender profile means they have little cook time and should be added to the end of a dish. Enoki is commonly used in Asian food but adds flavor and texture to any cuisine. You can add them raw to salads, put them on a sandwich, or just snack on them. Stir fries and soups are classic uses.

The fungi are thought to enhance health by boosting the immune system and treating liver problems. There is even a small school of opinion that the mushrooms can reduce the size of tumors but no linked scientific evidence.