Edible Okra Leaves – Can You Eat The Leaves Of Okra 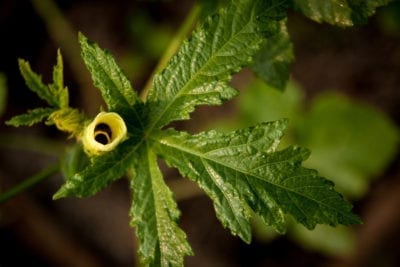 Many northerners may not have tried it, but okra is quintessentially southern and linked to the cuisine of the region. Even so, many southerners typically just use the okra pods in their dishes but what about eating the okra leaves? Can you eat the leaves of okra?

Can You Eat the Leaves of Okra?

Okra is thought to have originated in Africa and cultivation spread to the Middle East, India, and into the southern reaches of North America, most likely brought by the French via West Africa. It has since become a popular food in southern parts of the U.S.

While it is the pod which is most favored, okra leaves are, indeed, edible too. Not only the leaves but the beautiful blossoms as well.

Okra is a type of hibiscus plant that is grown for ornamental purposes and as a food crop. The leaves are heart-shaped, serrated, medium in size, bright green, and covered in small bristles. The leaves grow alternately with five to seven lobes per stem.

Okra pods are a traditional ingredient in gumbo and feature prominently in other southern dishes. Some people don’t like them because the pods are mucilaginous, a long word for slimy. The pods are often used, as in gumbo, to thicken soups or stews. Turns out that the edible okra leaves also have this thickening aspect. The leaves can be eaten raw or cooked like spinach, and a nice chiffonade (thinly cut strips) added to stew or soup will thicken it just as a roux or corn starch would.

As mentioned, the blooms are edible, as well as are the seeds, which can be ground and used as a coffee substitute or pressed for oil.

The flavor of the leaves is reportedly quite mild, but a little grassy, thus it works well with bold flavors such as garlic, onion, and peppers. It can be found in many Indian curries and pairs well with meat dishes. Okra leaves are rich in fiber and also contain vitamins A and C, calcium, protein, and iron.

Harvest okra leaves from late summer through the fall and use immediately or store them in a plastic bag in the refrigerator for up to three days.

Printer Friendly Version
Read more about Okra
<Previous
Did you find this helpful? Share it with your friends!
FacebookTweetPinEmail
Related Articles
Newest Articles
You might also like…
Additional Help & Information