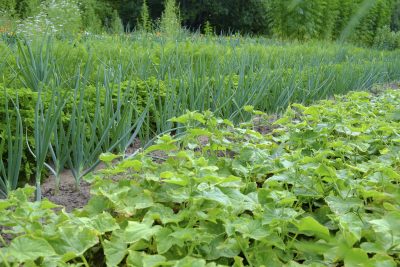 Just as humans are social creatures and drawn to each other for a variety of reasons, many garden crops benefit from companion planting. Take cucumbers, for instance. Choosing the right cucumber plant companions will help the plant thrive much like human companionship. While there are some plants that grow well with cucumbers, there are also others that can impede development. They may crowd the plant or hog water, sun, and nutrients, so knowing the most suitable companions for cucumbers is important.

Cucumber companion planting is beneficial for a number of reasons. Companion plants for cucumbers create diversity in the garden. Generally, we tend to plant tidy rows of just a few plant species, which isn’t how nature is designed. These groupings of similar plants are called monocultures.

Monocultures are far more susceptible to insect pests and disease. By increasing the diversity of the garden, you are mimicking nature’s way of minimizing disease and pest attacks. Utilizing cucumber plant companions will not only lessen potential attack, but also shelter beneficial insects.

Some plants that grow well with cucumbers, such as legumes, can also help enrich the soil. Legumes (such as peas, beans, and clover) have root systems that colonize Rhizobium bacteria and fix atmospheric nitrogen, which is then turned into nitrates. Some of this goes towards nurturing the legume, and some is released into the surrounding soil as the plant decomposes and is available to any companion plants that are growing nearby.

Plants That Grow Well with Cucumbers

Plants that grow well with cucumbers include legumes, as mentioned, but also the following:

Other flowers, besides sunflowers, may also be beneficial planted near your cukes. Marigold deters beetles, while nasturtiums thwart aphids and other bugs. Tansy also discourages ants, beetles, flying insects, and other bugs.