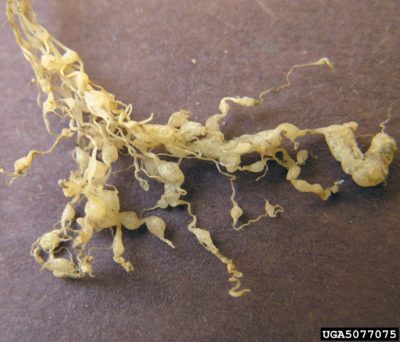 Okra, a favorite vegetable in the southeastern part of the U.S., has a multitude of culinary uses and can be steamed, fried, roasted, sautéed, etc. Southern Americans are not the only ones who love their okra; okra root knot nematodes have a penchant for it as well. Okra with root knot nematodes can cause serious economic losses for commercial growers and for the home gardener, nematode okra problems may be less costly but just as challenging. What are root knot nematodes and how can root knot nematodes on okra be managed?

Nematodes are commonly referred to as eelworms and are essential to the harmonic makeup of soil. While most are harmless and break down organic matter or control pests, some suck juices from plant roots.

When their numbers are nominal, nematodes rarely do much damage, although the injury made from their feeding can act as a portal to disease. Usually, a healthy balance of fungus, insects, and other predatory insects keep the nematodes in check, but sometimes things are out of balance and the scale shifts.

Unfortunately for okra enthusiasts, okra is particularly susceptible to okra root knot nematodes. Basically, when the nematode feasts on the plant roots, it interrupts the flow of nutrients and water the plant can absorb. This leaves a plant that is stunted and wilting, with chlorotic or pale green leaves and eventual reduced yields. These are the just the above ground symptoms.

Below ground, the tell-tale symptoms of an okra with root knot nematodes is unveiled. Infected roots swell at the infected site and form galls. The infected roots are stunted and lack fine feeder roots. Later in the growing season, roots may begin to rot.

Conditioning the garden and creating a healthy tilth will go a long way to foster beneficial insects and bacteria that naturally prey on nematodes. Obviously, this will help to reduce their numbers.

Nematicides can also be used but, unlike other chemical methods of control, they tend to reduce nematode populations slowly over time.

Printer Friendly Version
Read more about Okra
<PreviousNext>
Did you find this helpful? Share it with your friends!
FacebookTweetPinEmail
Related Articles
Newest Articles
You might also like…
Additional Help & Information