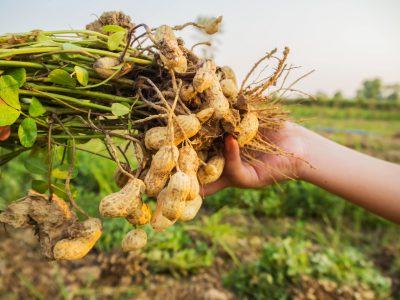 For many of us who grew up on PB & J, peanut butter is a comfort food. Like me, you may have noticed how the prices of these little jars of comfort have skyrocketed in the last few years. Due to rising prices and a desire to avoid unhealthy food preservatives, many home gardeners are now toying with the idea of growing their own peanuts and making their own peanut butter. How hard can it be, you may ask? After all a peanut is a peanut. Then a Google search of peanut plant seeds reveals that there’s more variety to peanuts than you knew. Continue reading to learn about the differences between these peanut plant varieties.

There are four main types of peanut plants grown in the United States: runner peanuts, Virginia peanuts, Spanish peanuts, and Valencia peanuts. While we are all probably familiar with Spanish peanuts, they actually only account for about 4% of the peanut crops grown in the U.S. The most commonly grown type of peanut plants are runner peanuts, which make up about 80% grown. Virginia peanuts account for 15% and Valencia peanuts contribute to only 1% to the U.S. peanut crop.

Breaking Down the Different Varieties of Peanut

These four types of peanut plants are further broken down into different varieties of peanuts.

Some common varieties of runner peanuts are:

Common varieties of Virginia peanuts include:

Some of the most common varieties of Spanish peanuts are:

Generally, most of the Valencia peanuts grown in the U.S. are of the variety Tennessee Reds.

Printer Friendly Version
Read more about Peanuts
<PreviousNext>
Did you find this helpful? Share it with your friends!
FacebookTweetPinEmail
Related Articles
Newest Articles
You might also like…
Additional Help & Information