Differences Between Peppers – How To Identify Pepper Plants 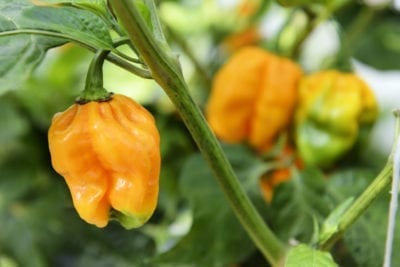 For many growers, the process of starting seeds for the garden can be hectic. Those with larger growing spaces may find it especially difficult to get an early start on plants like peppers. With this, it is only natural that plant labels may become lost, leaving us to question which pepper plants are which. While some gardeners wait patiently until fruit appears later in the season, others may be eager to identify and distinguish between the types of peppers that they have planted much sooner, especially if they are passing them along to others.

How are Pepper Plants Different?

In general, there are several different types and species of peppers that growers may choose for their gardens. Even novice growers may be familiar with both sweet and hot peppers; however, the species of these plants will impact their size, shape, flower appearance, and sometimes appearance of the leaves.

How to Identify Pepper Plants

In many cases, the differences between peppers of the Capsicum genus can be minimal. The first step in learning to ID pepper plants is becoming familiar with the seeds. When planting a mixture of seeds, try separating them by color. Often, seeds that are very light or pale in color are for sweet or less spicy types of pepper, while darker seeds may belong to those that are hotter.

Once the seeds have germinated, pepper plant identification may become more difficult. Though some specific varieties of pepper may have characteristics that make them more identifiable, such as variegated leaves, most look relatively similar. It’s not until the plants begin to flower that each pepper species may become more distinguishable.

Among the most commonly planted pepper plants in the home garden are the “annum” species. These peppers include bell, poblano, and jalapeno peppers. This species of pepper is characterized by its solid white flowers.

Another popular species, “chinense,” is prized for its spice and heat. Peppers like the Carolina Reaper and Scotch Bonnet also produce solid white flowers. However, unlike their mild counterparts, the centers of these flowers are usually dark in color.

Other species such as baccatum, cardenasii, and frutescens vary from the white flowered peppers in both flower pattern and color. While this information cannot ID pepper plants within the same species, it can assist growers who have planted multiple species in the same garden.