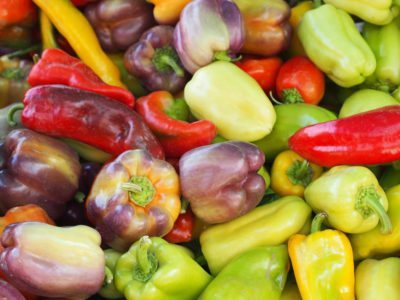 The popularity of spicy, hot peppers can be demonstrated clearly just by looking down the hot sauce aisle of the market. It’s no wonder with their varied colors, shapes, and heat indexes. But let’s not forget about the various types of sweet peppers varieties, each of which makes a delicious contribution to a variety of cuisines. For those folks who prefer peppers that aren’t hot, read on to find out about the different kinds of sweet peppers.

The pepper that gets used most often is undoubtedly the green bell pepper. It is a common fixture in many dishes and can be found at every supermarket. Mounded near the green bell peppers are the sunrise-hued red, yellow, and orange bell peppers. And, if you are really lucky, sometimes you will see purple, adding to the cacophony of color in the produce aisle.

So is there a difference between these colored beauties? Not really. All of them are sweet bell types of peppers. You may notice that green bell peppers are usually less expensive than their multi-hued neighbors. This is simply because green bell peppers are picked when they are full-sized but not as ripe. As the fruit ripens, it begins to transform from drab green to a kaleidoscope of sunny hues – like red peppers.

The green, red, orange, and yellow bell peppers all keep their color when cooked; however, the purple variety is better used fresh, as its color darkens and becomes somewhat muddy looking when cooked.

Other Kinds of Sweet Peppers

The sweet bell pepper types are one way to go for people that like peppers that aren’t hot but are by no means the only option. For those who are a little more adventurous and don’t mind a hint of heat, there are plenty of other options.

Sweet cherry peppers, for instance, while they may have a slight bite, are for the most part true to their name. They look like miniature sweet bell peppers and are delicious raw and eaten as a snack, tossed into salads, or pickled.

Cubanelle peppers are long, thin peppers that start out a pale green, but when allowed to ripen, darken to a rich red. Italian frying peppers are, as their name suggests, best when they are sliced lengthwise and lightly fried in olive oil. They can be eaten this way or combined with Italian cured meats to make a sandwich.

Anaheim chilies can be used when green or red and are the most common chili pepper used in the United States. Ancho chili peppers are dried poblano peppers that, when combined with Mulato and Pasilla peppers, form the holy trinity of peppers used to make mole sauces.

There are tons of other less easy-to-find, slightly more exotic options for sweet peppers as well. The Aja Panca chili pepper has a sweet, berry-like, slightly smoky flavor and is the second most common pepper in use in Peru. The Dolmalik chili from Turkey has a rich smoky, sweet flavor that is often used powdered as a dry rub for meat.

This is just a taste of what a world traveler might come upon in the search for the best sweet pepper. They might also find these interesting pepper varieties: