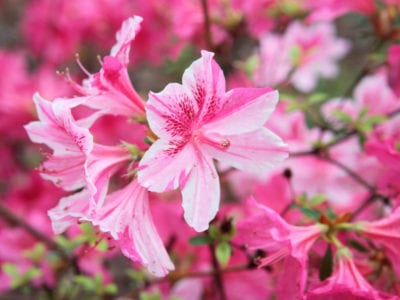 For shrubs with spectacular blossoms that tolerate shade, many gardeners rely on different varieties of azalea. You’ll find many that might work in your landscape. It’s important to select types of azaleas adapted to the area in which they will be planted. If you’d like more information about attractive azalea plant cultivars, read on.

The explosion of blossoms on azaleas creates a show that few shrubs can rival. The generous load of blossoms in vivid shades makes azalea an extremely popular plant. Most azalea plant cultivars bloom in spring, but some bloom in summer and a few in fall, making it possible to have azaleas flower in your landscape for many months.

When we say there are quite a few kinds of azalea bushes, we aren’t exaggerating. You’ll find both evergreen and deciduous azalea varieties with different hardiness levels as well as varying blossom shapes.

Evergreen vs. Deciduous Varieties of Azalea

The two basic varieties of azaleas are evergreen and deciduous. Evergreen azaleas hold onto some of their leaves through winter, while deciduous azaleas drop leaves in autumn. The azaleas native to this continent are deciduous, but most evergreen azaleas originated in Asia.

The evergreen types of azaleas are the more popular types for residential areas. On the other hand, deciduous azalea varieties work nicely in woodland settings.

Different azalea plant cultivars are also described by the shape or form of their flowers. Most deciduous azaleas have flowers in the shape of tubes with long stamens that are longer than the petals. Evergreen azaleas usually have single flowers, with multiple petals and stamens. The stamens of some semi-double flowers present like petals, while those azalea varieties with double flowers have all stamens transformed into petals.

Those kinds of azaleas with two flower shapes that look like one is inserted into another are called hose-in-hose types. They are known to hold onto their blossoms until they wither on the plant rather than falling to the ground.

Other Variations in Azalea Plant Cultivars

You can also group types of azaleas by when they bloom. Some bloom early, flowering from late winter into spring. Others flower in summer, and late-flowering varieties keep blooming through fall.

If you select carefully, you can plant kinds of azaleas that bloom in sequence. That might mean flowers from spring through fall.