Little Pepper Inside Pepper – Reasons For Pepper Growing In A Pepper 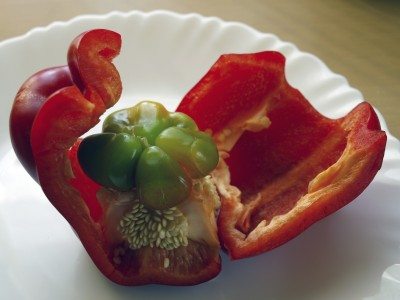 Have you ever cut into a bell pepper and found a little pepper inside the larger pepper? This is a fairly common occurrence, and you may be wondering, “Why is there a small pepper in my bell pepper?” Read on to find out what causes a pepper with baby pepper inside.

Why is There a Small Pepper in My Bell Pepper?

This little pepper inside a pepper is referred to as an internal proliferation. It varies from an irregular fruit to an almost carbon copy of the larger pepper. In either case, the little fruit is sterile and its cause is possibly genetic. It may also be due to rapid temperature or humidity fluxes, or even because of the ethylene gas used to hasten ripening. What is known is that it shows up in seed lines through natural selection and is unaffected by weather, pests, or other external conditions.

Does this confuse you even more as to why you have a pepper with a baby pepper inside? You aren’t alone. Little new information has come to light as to why a pepper is growing in another pepper in the last 50 years. This phenomenon has been of interest for many years, however, and was written about in the 1891 Bulletin of the Torrey Botanical Club newsletter.

Pepper Growing in a Pepper Phenomenon

Internal proliferation occurs among many seeded fruits from tomatoes, eggplants, citrus and more. It seems to be most common in fruit that has been picked unripe and then artificially ripened (ethylene gas) for the market.

During the normal development of bell peppers, seeds develop from fertilized structures or ovules. There are a multitude of ovules within the pepper which turn into tiny seeds that we discard before eating the fruit. When a pepper ovule gets a wild hair, it develops an internal proliferation, or carpelloid formation, which more resembles the parent pepper rather than a seed.

Normally, fruit forms if ovules have been fertilized and are developing into seeds. On occasion, a process called parthenocarpy occurs wherein the fruit forms with an absence of seeds. There is some evidence that suggests there is a correlation between the parasitic pepper inside a pepper. Internal proliferations most often develop in the absence of fertilization when the carpelloid structure mimics the role of seeds resulting in parthenocarpic pepper growth.

Parthenocarpy is already responsible for seedless oranges and the lack of large, unpleasant seeds in bananas. Understanding its role in engendering parasitic peppers may end up creating seedless pepper varieties.

Whatever the exact cause, commercial growers consider this an undesirable trait and tend to select newer cultivars for cultivation. The pepper baby, or parasitic twin, is perfectly edible, however, so it’s almost like getting more bang for your buck. I suggest just eating the little pepper inside a pepper and continue to marvel at the strange mysteries of nature.