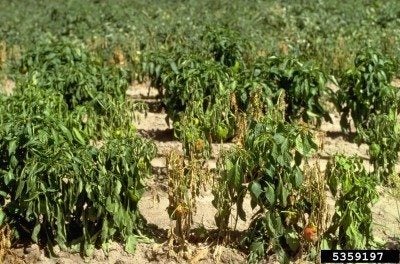 The soil is full of living things; some useful, like earthworms, and others not as useful, like the fungi in the genus Phytophthora. These irksome pathogens can last long after infected plants have composted into nothing, continuing to attack plants at all stages of development. Knowing the signs of phytophthora pepper blight will help you head off disaster if this fungus appears in your garden.

Pepper plant blight manifests in many different ways, depending on what part of the plant is infected and at what stage of growth the infection set in. Many times, seedlings infected with phytophthora die shortly after emergence, but older plants usually continue to grow, developing a dark brown lesion near the soil line.

As the lesion spreads, the stem is slowly girdled, causing sudden, unexplained wilting and the eventual death of the plant – root symptoms are similar but lack the visible lesions. If phytophthora spreads to the leaves of your pepper, dark green, circular or irregular lesions may form on the tissue. These areas quickly dry to a light tan color. Fruit lesions begin similarly, but blacken and shrivel instead.

Phytophthora blight in peppers is common in wet areas when soil temperatures are between 75 and 85 F. (23-29 C.); ideal conditions for rapid multiplication of the fungal bodies. Once your plant has phytophthora pepper blight, there’s no way to cure it, so prevention is key. In beds where phytophthora has been a problem, crop rotation with brassicas or grains on a four-year rotation can starve the fungal bodies out.

In a new bed, or after your crop rotation is complete, increase drainage by amending the soil heavily with compost, using as much as 4 inches (10 cm.) on a 12 inch (30.5 cm.) deep bed. Planting peppers on 8 to 10-inch (20.5 to 25.5 cm.) tall mounds can further help to prevent the development of phytophthora. Waiting to water until the soil 2 inches (5 cm.) below the surface feels dry to the touch will prevent overwatering and deny phytophthora the conditions it needs to survive.