Help, My Rhubarb Is Leggy – Reasons For Spindly Rhubarb Stalks 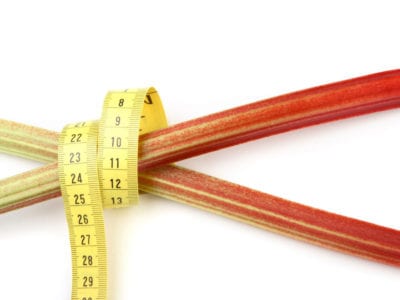 Rhubarb is a perennial vegetable with large leaves and characteristic, thick, red stalks. Often used as pie filling, rhubarb is easy to grow and requires minimal care. So, if your rhubarb is leggy or you’re seeing spindly or thin rhubarb stalks, it’s time to find out why.

It takes rhubarb plants two years to become established. During this period, it’s normal for the plant to produce spindly rhubarb stalks. Harvesting during this establishment period can reduce the vigor of the plant.

The solution: hold off harvesting young rhubarb plants for the first two years. This establishment period allows the plant to develop a strong root system that supports future plant growth.

Rhubarb is a long-living perennial that can grow for decades. Each spring brings an abundance of new shoots emerging from the crown. Eventually, this causes overcrowding and thinning rhubarb stalks.

The solution: old plants benefit from periodically dividing the crown. This can be done in the spring or fall. To reduce transplant shock, dig rhubarb roots on a cool, cloudy day in the early morning or evening. Keep recently divided transplants well-watered.

The formation of flower buds prompts plants to divert energy into the production of blossoms. This may be the cause of your rhubarb being leggy in appearance.

The solution: remove flower buds as soon as they appear. Flowering is a natural part of the plant’s life cycle and mature plants tend to be more prolific in terms of flower production. Environmental conditions can also trigger plants to flower. These include insufficient rainfall, high temperatures, or poor soil. Supplemental water and supplying nutrients to the plants help reduce flower production.

Poor soil and drought conditions can reduce a rhubarb plant’s overall health. Seeing thin rhubarb stalks on a mature, established plant that is not overcrowded can be a sign of declining growing conditions.

The solution: In arid climates and during periods of drought, water rhubarb weekly. Apply an organic rich compost to the top of the soil or side dress rhubarb plants with a balanced (10-10-10) fertilizer in early spring.

Mature rhubarb plants can grow quite large. Competition from other plants or weeds reduces the nutrients available for each individual plant. The result is a decrease in stalk diameter and spindly rhubarb plants.

The solution: allow two to four feet (61 to 122 cm.) between plants and a minimum of three feet (1 m.) between rows. Control weeds with mulch or by shallow hoeing and hand weeding.

Typically, rhubarb is harvested during the spring months when the stalks are still young and tender. Continually harvesting rhubarb stalks throughout the growing season stresses the plants. This reduces yields and causes thinning stalks the following year.

The solution: harvesting a few stalks from established rhubarb plants for a special summertime treat isn’t a problem, but avoid heavy or continual harvesting throughout the summer months.

Rhubarb is a winter hardy perennial which thrives in USDA hardiness zones 3 to 6. Some gardeners report being able to grow rhubarb as an annual in zones 7 and 8.

The solution: for thick stalks and healthy plants, grow rhubarb in areas where the average daily summertime temperature remains below 90 degrees F. (32 C.).

Properly cared for rhubarb plants will produce plenty of thick, red stalks for pies, desserts, and fruit sauces for years to come.