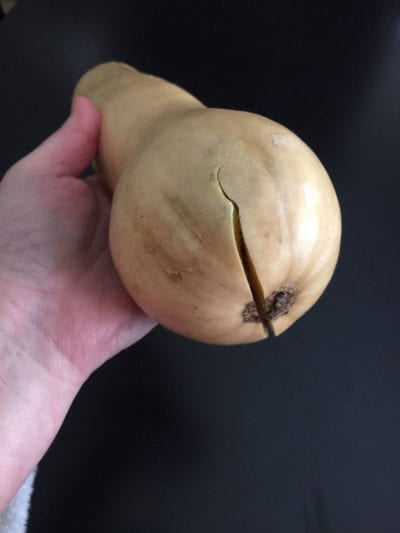 Help, My Butternut Squash is Splitting!

Cracking squash fruit is not an uncommon occurrence; in fact, it happens to other vine fruits too, including melons, pumpkins, cucumbers and even tomatoes. As the squash reach maturity, the outer skins harden. This hard outer layer allows for a long storage period of several months. However, once the hardening process begins, anything that elicits additional growth can result in cracking squash fruit.

What can facilitate late growth in butternut squash? Heavy rain or over enthusiastic irrigation is the most common reason for butternut squash splitting. This extra water signals to the squash that it should grow more. The problem is, the outer shell has already hardened, so when the fruit grows, there isn’t anywhere for it to go. It’s like blowing a balloon up. There is a certain amount of air that the balloon will contain before it eventually explodes. More or less, this is akin to fruit split in butternut squash.

This butternut squash problem is further exacerbated when there is an abundance of nitrogen in the soil. Again, this signals to the squash that it is time to grow. Nitrogen application at the wrong stage of maturation can cause cracking squash fruit. Butternut squash shell splitting also results from late harvesting. If the squash of other fruit prone to cracking is left on the vine too long, you may end up with splitting.

So what can you do to prevent splitting butternuts?

So, if you have fruit that is cracked, is it still edible? Cracked squash usually heals over. You will see that the fruit has formed a sort of scab over the cracked area. This scab is formed when a substance called ‘suberin’ oozes out and then dries. Suberin is a protective mechanism that repels moisture and attempts to thwart the entry of bacteria. If a bacterium has entered the fruit, it will soon be patently obvious and irreparable, as the fruit will rot. If not, a butternut scarred with suberin is perfectly okay to eat.