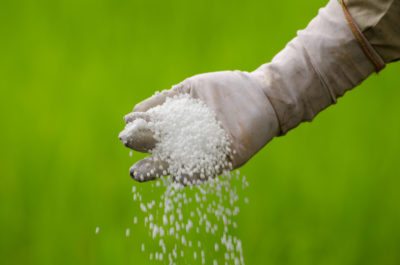 Some of the most common symptoms of nitrogen deficiency in plants include the yellowing and dropping of leaves and poor growth. Flowering or fruit production may also be delayed.

As organic matter decomposes, nitrogen is slowly converted to ammonium, which is absorbed by plant roots. Excess ammonium is turned into nitrate, which plants also use to produce protein. However, unused nitrates remain in the groundwater, resulting in leaching of the soil.

Since nitrogen requirements for plants vary, supplemental nitrogen fertilizer should only be used in the correct proportion. Always check the nitrogen analysis on chemical fertilizer packaging to determine the percentage amount of nitrogen present. This is the first of three numbers on the package (10-30-10).

Too much nitrogen present in the soil can be just as harmful to plants as too little. When there is high nitrogen in soil, plants may not produce flowers or fruit. As with nitrogen deficiency in plants, the leaves may turn yellow and drop. Too much nitrogen can result in plant burning, which causes them to shrivel and die. It can also cause excess nitrate to leach into groundwater.