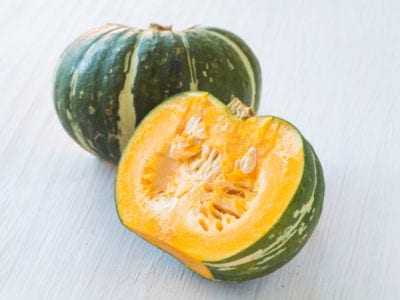 In Japan, “kabocha” refers to winter squash and pumpkins. Elsewhere, “kabocha” has come to refer to Cucurbita maxima, a type of winter squash developed in Japan where it’s referred to as “kuri kabocha” or “chestnut squash” due to its nutty flavor.

Originally cultivated in South America, kabocha winter squash was first introduced in Japan during the Meiji Era and then spread to North America in the 19th century.

Although kabocha winter squashes are on the small side, kabocha squash growing requires plenty of space due to the vining habit of the kabocha squash plants.

While kabocha squash plants are adaptable to a variety of soils, they prefer fertile, well-draining soil with a pH of 6.0-6.8.

Start seeds indoors 4 weeks prior to the last frost in your area. Start seeds in peat pots that can be planted directly into the soil, since kabocha squash plants have sensitive root systems that dislike transplanting. Keep the seeds consistently moist and in at least 6 hours of sun per day.

When soil temperatures have reached 70 F. (21 C.) transplant the kabocha squash pumpkins into an area of full to partial sun in mounds that are 3 inches (7.5 cm.) tall.  Because they are a vining type of plant, be sure to provide them some type of support to clamber up.

Mulch around each plant to help retain moisture and keep the roots cool. Keep the plants regularly watered to avoid drought stress. Water them at the base of the plant to avoid wetting the leaves and introducing fungal disease.

Keep an eye out for pests. Use row covers up until the plants begin to flower.

When to Pick Kabocha Squash

Kabocha squash pumpkins are ready to harvest about 50-55 days after fruit set. Depending upon the variety you grow, the fruit may be green, gray, or pumpkin orange. Ripe kabocha winter squash should sound hollow when lightly thumped and the stem has begun to shrivel.

Cut the fruit from the vines with a sharp knife and then cure the squash by exposing the fruit to sunlight for about a week or in a warm, well-ventilated space indoors.

Store kabocha winter squash at 50-60 F. (10-15 C.) with a relative humidity of 50-70% and good airflow. After storing for a few weeks, most varieties of kabocha squash pumpkins become sweeter. The exception is the variety ‘Sunshine,’ which is excellent freshly harvested.