Gray Mold Of Tomatoes: How To Treat Gray Mold In Tomato Plants 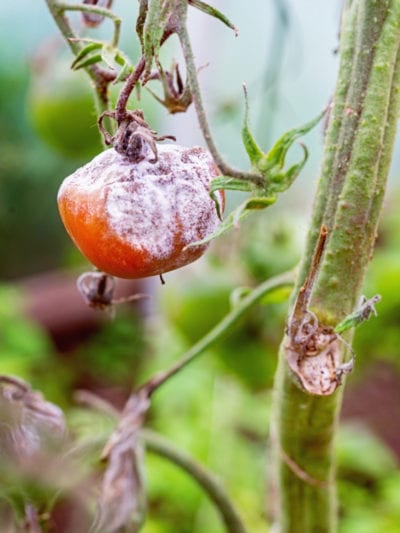 A disease of tomatoes that occurs both in greenhouse-produced and garden-grown tomatoes is called tomato gray mold. Gray mold in tomato plants is caused by a fungus with a host range of over 200. Gray mold of tomatoes also causes postharvest rot at harvest and in storage and can cause a variety of other diseases, including damping off and blight. Given the seriousness of the disease, what are the symptoms of tomato gray mold and how is it managed?

Gray mold, or Botrytis blight, affects not just tomatoes, but other vegetables such as:

Caused by the fungus Botrytis cinerea, these one-celled spores are borne on multiple branches which gives the fungus its name from the Greek ‘botrys,’ meaning a bunch of grapes.

Gray mold of tomatoes appears on seedlings and young plants and appears as a grayish-brown mold that covers stems or leaves. Blossoms and the blossom end of the fruit are covered in dark gray spores. The infection spreads from the blossoms or the fruit back toward the stem. The infected stem turns white and develops a canker that may girdle it which may result in wilting above the infected region.

Tomatoes infected with gray mold turn light brown to gray when they come into contact with other infected plant parts or develop white rings called “ghost spots” if they are infected directly by airborne spores. Fruit that is infected and stored becomes covered with a gray coating of spores and may also show white mycelium (white filaments) on the surface of the fruit.

Gray mold is more prominent when there is rain, heavy dew, or fog prior to harvesting. The fungus also infiltrates injured plant tissues. Spores of this fungal disease reside in the residue of host plants such as tomatoes, peppers, and weeds, and are then spread via wind. The spores then land on the plants and create an infection when there is water available. The disease progresses most rapidly when temperatures are 65-75 F. (18-24 C.).

To combat the incidence of gray mold, irrigation needs to be carefully managed. Tomato fruit that is allowed to come into contact with water is more likely to become infected. Water at the base of the plants and allow the topsoil to dry between waterings.

Handle plants and fruit carefully to avoid injury, which may lead to a portal for disease. Remove and destroy infected plants.

Fungicides may be used to prevent infection but will not suppress the disease in plants that are already infected.