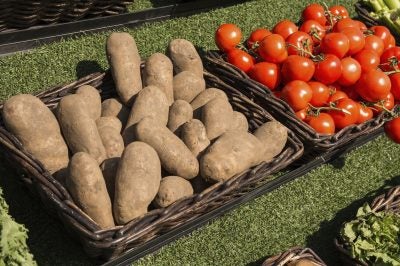 Can You Plant Tomatoes with Potatoes?

These solanaceous crops host fungi that cause Fusarium and Verticillium wilt, which spread throughout the soil. The diseases keep the plants from utilizing water, resulting in leaf wilt and death. If one crop gets either disease, chances are good the other will too, especially if they are in close proximity to each other.

Again, referring to the “near” in planting tomatoes near potatoes – be sure to give the two crops adequate space between each other. A good ten feet (3 m.) between tomatoes and potatoes is the rule of thumb. Also, practice crop rotation to ensure healthy crops when growing tomato plants next to potatoes. Crop rotation should be a standard practice for all gardeners to prevent cross-contamination and the spread of diseases. Use new organic compost and soil when growing tomatoes with potatoes to reduce the risk of sharing disease.

All that said, it is definitely okay to grow potatoes near tomatoes if you practice the above. Just remember to keep some distance between the two crops. If you plant them too close together, you risk damaging one or the other. For instance, if the spuds are too close to the tomatoes and you try to harvest the tubers, you may damage the tomato roots, which can lead to blossom end rot.

Lastly, both tomatoes and potatoes absorb their nutrients and moisture through the top two feet (61 cm.) of soil, so be sure to keep that layer moist during the growing season. A drip system will keep the plants irrigated while keeping the leaves dry, which in turn will cut down on the incidence of fungal and bacterial infections and make for a harmonious marriage of tomatoes and potatoes in the garden.