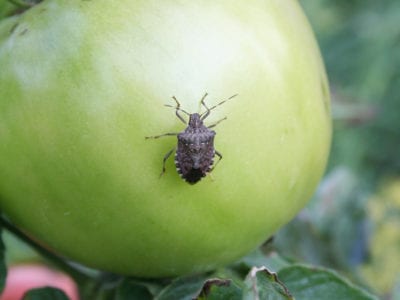 Stink bugs and leaf-footed bugs are closely related insects that feed on tomato plants and fruit. The damage to the foliage and stems is negligible, but the insects can ruin young fruit. Find out how to get rid of leaf footed bugs and stink bugs before they destroy your crop.

How Do Stink Bugs Damage Tomatoes?

The severity of leaf-footed bug damage to tomatoes depends on the size of the tomato when the insect attacks. When the bugs feed on tiny, new tomatoes, the tomato will likely never mature and develop. You may find that little tomatoes drop off the vine. When they feed on medium sized tomatoes, they cause scars and depressions in the fruit. When the insects feed on large, nearly mature fruit, they cause minimal damage, and the fruit is often good enough to eat, though you may notice discoloration.

Stink bug damage to tomato plants may also be a concern. Although the damage on foliage and stems may look minimal, the insects can carry viruses that they spread to the plants. They also leave excrement on both foliage and fruit.

Stink bugs and leaf-footed bugs have long mouthparts they use to pierce tomato leaves, stems, and fruit. The length of the structure depends on the size of the insect. After penetrating tomato plants and fruit, the insects suck out the juices. If they encounter seeds, they inject digestive enzymes to dissolve them.

The piercing mouthpart may carry a yeast infection that causes fruit discoloration. The likelihood of yeast infection increases during wet weather. The damage is only cosmetic, and it won’t make you sick if you eat it.

Keep the garden weed and debris free to eliminate hiding places and overwintering locations. Begin handpicking the insects early in the growing season. They are easy to pick off when they are young because they congregate in central locations. Look carefully under leaves and among fruit clusters. Knock them into a jar of soapy water or use a small, handheld vacuum to remove them from the plants.

They have quite a few natural enemies, including birds, spiders, and other insects. The broad-spectrum insecticides that kill the target insects also kill their natural enemies as well as bees and other pollinators. You can usually keep them under control by handpicking alone, but it you find that they continue to damage your crop, spray young nymphs with insecticidal soap or neem spray. These sprays won’t kill adults.