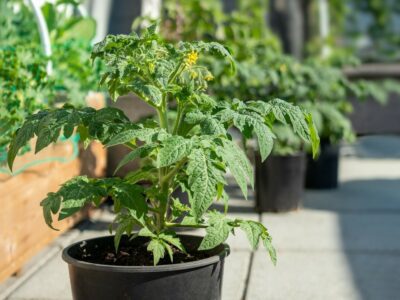 If your tomatoes have severely distorted top growth with the little leaflets growing along the midrib remaining stunted, it is possible that the plant has something called Tomato Little Leaf Syndrome. What is tomato little leaf and what causes little leaf disease in tomatoes? Read on to find out.

What is Tomato Little Leaf Disease?

Little leaf of tomato plants was first spotted in northwestern Florida and southwestern Georgia in the fall of 1986. The symptoms are as described above along with interveinal chlorosis of the young leaves with the stunted ‘leaflet’ or “little leaf”– hence the name. Twisted leaves, brittle midribs, and buds which fail to develop or set, along with distorted fruit set, are some of the signs of tomato little leaf syndrome.

Fruit will appear flattened with cracking running from the calyx to the blossom scar. The afflicted fruit will contain almost no seed. Severe symptoms mimic and may be confused with Cucumber Mosaic Virus.

Little leaf of tomato plants is similar to a non-parasitic disease found in tobacco crops, called “frenching.” In tobacco crops, frenching occurs in wet, poorly aerated soil and during overly warm periods. This disease has been reported to afflict other plants too such as:

Chrysanthemums have a disease that is akin to tomato little leaf which is called yellow strapleaf.

Causes and Treatment for Little Leaf Disease of Tomato Plants

The cause, or etiology, of this disease is unclear. No viruses were detected in afflicted plants, nor were there any clues regarding nutrient and pesticide amounts when tissue and soil samples were taken. The current theory is that an organism synthesizes one or more amino acid analogs that are released into the root system.

These compounds are absorbed by the plant, causing stunting and morphing of foliage and fruit. There are three possible culprits:

At this point, the jury is still out as to the precise cause of tomato little leaf. What is known, is that higher temps seem to be related to acquiring the disease, as well as its being more prevalent in neutral or alkaline soils (rarely in soil of a pH of 6.3 or less) and in wet areas.

Currently, no commercial cultivars with known resistance to little leaf are available. Since the cause is yet undetermined, there is no chemical control available either. Drying out wet areas of the garden and reducing the soil pH to 6.3 or less with ammonium sulfate worked in around the roots are the only known controls, cultural or otherwise.