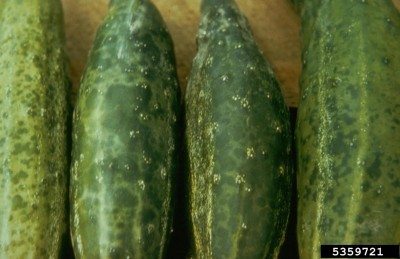 Cucumber mosaic disease was first reported in North America around 1900 and has since spread worldwide. Cucumber mosaic disease isn’t limited to cucumbers. While these and other cucurbits can be stricken, Cucumber Mosaic Virus (CMV) regularly attacks a wide variety of garden vegetables and ornamentals as well as common weeds. It’s so similar to the Tobacco and Tomato Mosaic Viruses only an expert horticulturalist or laboratory testing can distinguish one from the other.

What causes Cucumber Mosaic disease is the transfer of the virus from one infected plant to another through the bite of an aphid. The infection is acquired by the aphid in just one minute after ingestion and is gone within hours. Great for the aphid, but really unfortunate for the hundreds of plants it can bite during those few hours. If there’s any good news here it’s that unlike some other mosaics, Cucumber Mosaic Virus can’t be passed along through seeds and won’t persist in plant debris or soil.

Cucumber Mosaic Virus symptoms are rarely seen in cucumber seedlings. Signs become visible at about six weeks during vigorous growth. The leaves become mottled and wrinkled and the edges curl downward. Growth becomes stunted with few runners and little in the way of flowers or fruit. Cucumbers produced after infection with cucumber mosaic disease often turn gray-white and are called “white pickle.” The fruit are often bitter and make mushy pickles.

Cucumber Mosaic Virus in tomatoes is evidenced by stunted, yet bushy, growth. Leaves may appear as a mottled mixture of dark green, light green, and yellow with a distorted shape. Sometimes only part of the plant is affected with normal fruit maturing on the uninfected branches. Early infection is usually more severe and will produce plants with low yield and small fruit.

Peppers are also susceptible to Cucumber Mosaic Virus. Symptoms include the mottled leaves and stunted growth of other mosaics with the fruit showing yellow or brown spots.

Even though botanists can tell us what causes cucumber mosaic disease, they have yet to discover a cure. Prevention is difficult because of the short time between when the aphid contracts the virus and it’s passing it along. Early season aphid control may help, but there is no known Cucumber Mosaic Virus treatment at the present time. It’s recommended that if your cucumber plants are affected by Cucumber Mosaic Virus, they should be removed immediately from the garden.