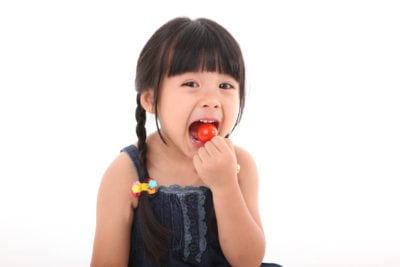 Tomatoes are likely the most commonly grown home garden crop. Maybe it’s because of the sheer variety available or maybe it’s because of the myriad of uses to which tomatoes can be consumed. In any case, growing sweet tomatoes can be quite an obsession with some, each year trying to figure out how to make tomatoes sweeter than the year before. Is there a secret to sweet tomatoes? It turns out that there is a secret component to tomato sweetening. Read on to find out how to grow sweeter tomatoes.

All tomato varieties are not equal in the level of fruit sweetness. Homegrown doesn’t necessarily equal sweeter tasting. It turns out there are a number of factors in play with relation to tomato sweetening.

The sweetness of a tomato is comprised of plant chemistry and other variables such as temperature, soil type and the amount of rain and sun given to the plant while growing. A balance of acidity and sugar are what make a tomato a tomato, and for some, those with a lower level of acidity and a higher level of sugar make for the best fruit.

Scientists have actually been doing research to unlock the secret to sweet tomatoes. According to them, good tomato flavor is a blend of sugars, acids and rather baffling chemicals that we smell and equate with a prime tomato. They call these “aroma volatiles” and have mapped out more than 3,000 of them amongst over 152 varieties of heirloom tomatoes.

Another group of scientists has been searching for the genes responsible for heterosis. Heterosis occurs when cross-breeding two types of plants to produce more vigorous offspring that have higher yields than the parent plants. They found that when a gene called SFT, which produces a protein called florigen, is present, yields can increase up to 60%.

How does this relate to growing sweeter tomatoes? When the right levels of florigen are present, yields increase because the protein instructs the plant to stop making foliage and start making flowers.

One might think that a boost in fruit production would result in tarter tomatoes since plants can only produce a certain amount of sugar that is then equally distributed amongst the entire yield. It turns out that when florigen is present in certain doses, the gene actually boosted the sugar content, thus the sweetness of the fruit.

How to Grow Sweeter Tomatoes

Okay, science is all great and fascinating, but what can you personally do to grow the sweetest tomatoes? Choosing the right cultivar is a start. Select varieties that are known to be sweet. Large tomatoes, like beefsteak, are often less sweet. Grape and cherry tomatoes are often as sweet as candy. The rule of thumb for sweeter tomatoes – grow small.

Be sure to select a tomato that is right for your region too, one that is adapted to the amount of sun, rain and growing season length. Start your tomato plants early so they have plenty of time to ripen. Ripe tomatoes equal sweet tomatoes. If possible, allow them to ripen on the vine which will also makes them sweeter.

Prior to planting your tomatoes, incorporate plenty of organic matter to give the plants plenty of nutrients. Be consistent with watering.

Then there are the unconventional methods for promoting sweetness. Some folks suggest adding baking soda or Epsom salt to the soil will promote sweetness. No, it doesn’t really work, not really, no. But baking soda mixed with vegetable oil and castile soap and then sprayed on the plants will help with fungal diseases. And, as for the Epsom salts, a mix of salts and water can discourage blossom end rot.