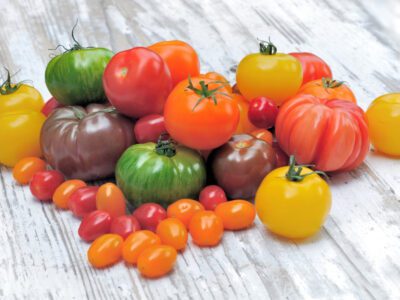 It may surprise you to learn that with varieties of different tomatoes, color is not constant. As a matter of fact, tomatoes weren’t always red. The tomato varieties that existed when tomatoes were first cultivated were yellow or orange.

Through breeding, the standard color of tomato plant varieties is now red. While red may be the predominate color among tomatoes now, that doesn’t mean that there aren’t other colors of tomatoes available. Let’s look at a few.

Red tomatoes are the ones that you will see most commonly. Red tomato varieties include commonly known varieties like:

Commonly, red tomatoes have the rich tomato flavor that we are accustomed to.

These tomatoes are just a bit less vibrant than red varieties. They include:

The flavors of these tomatoes are similar to red tomatoes.

These tomatoes tend to be sweeter, almost fruit-like in flavor.

Yellow tomatoes are anywhere from a dark yellow to a light yellow color. Some varieties include:

These tomato plant varieties are normally low acid and have a less tangy flavor than the tomatoes most people are use to.

White tomatoes are a novelty among tomatoes. Typically they are a pale, pale yellow. Some white tomatoes include:

The flavor of white tomatoes tends to be bland, but they have the lowest acid of any of the tomato varieties.

Normally, when we think of a green tomato, we think of a tomato that isn’t ripe. There are tomatoes that ripen green though. These include:

Green tomato variety is typically strong but lower in acid than reds.

Purple or black tomatoes hold onto more of their chlorophyll than most other varieties and will, therefore, ripen to dark red with purple tops or shoulders. Tomato plant varieties include:

Purple or black tomatoes have a strong, robust, smoky flavor.