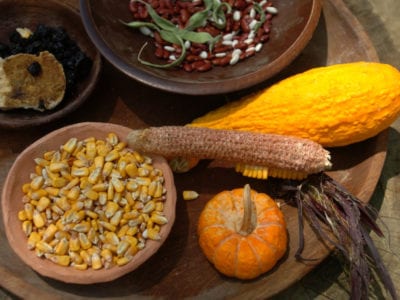 Thinking back to high school, American history “began” when Columbus set sail on the ocean blue. Yet populations of native cultures flourished on the American continents for thousands of years prior to this. As a gardener, did you ever wonder which native American vegetables were cultivated and consumed in pre-Columbian times? Let’s find out what these vegetables from the Americas were like.

When we think of native American vegetables, the three sisters often come to mind. Pre-Columbian North American civilizations grew corn (maize), beans, and squash in symbiotic companion plantings. This ingenious method of cultivation worked well as each plant contributed something which the other species required.

Additionally, a diet of corn, beans, and squash complements each other nutritionally. Together, these three vegetables from the Americas provide a balance of the necessary carbohydrates, protein, vitamins, and healthy fats.

In addition to corn, beans, and squash, European settlers discovered a multitude of vegetables in early America. Many of these native American vegetables were unknown to Europeans in pre-Columbian times. These vegetables from the Americas were not only adopted by Europeans, but they also became key ingredients in “Old World” and Asian cuisine.

In addition to corn, beans, and squash, did you know these common foods had their “roots” in North and South American soil?

In addition to those veggies which are staples in our modern-day diets, other early American vegetables were cultivated and used for sustenance by the pre-Columbian inhabitants of the Americas. Some of these foods are gaining popularity as renewed interest in growing native American vegetable rises: