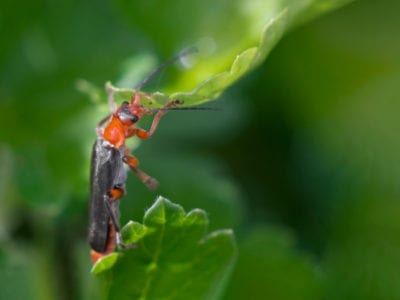 Soldier beetles are commonly mistaken as other, less beneficial, insects in the garden. When on a bush or flower, they resemble fireflies, but without the ability to glow. In the air they’re often thought to be wasps and quickly shooed away. Smart gardeners who learn what are soldier beetles soon learn to attract these garden friends instead of trying to keep them away.

You can identify soldier beetles by their yellowish to tan color, along with a large black spot on each wing. Otherwise known as leatherwings, the colors of soldier beetles vary depending on the part of the country in which they live.

Are Soldier Beetles Good or Bad?

The soldier beetle life cycle begins as a larva that hatches from an egg in the fall. These larvae are predators and will eat the eggs of many garden pests, as well as damaging larvae and soft insect bodies. They then hibernate in the soil or among fallen leaves until spring.

The beetles hatch from the larva when the weather warms and immediately begin to seek out bright flowers such as goldenrod, zinnia, and marigold. Their constant flitting from flower to flower make soldier beetles a valuable pollinator for any flower or herbaceous garden. They feed on nectar and pollen and have no way to bite or sting humans. So, are soldier beetles good or bad? Yes, these are considered good for the garden.

Attracting Soldier Beetles to the Garden

Soldier beetles in the garden are a good thing. These beneficial insects are most useful in the late summer when aphids abound, and other predatory insects begin to lay their eggs. Soldier beetle larva help to rid the garden of these pests. In the spring, they can rival bees when it comes to pollinating gardens and flower beds.

If your goal is to attract soldier beetles to your garden to take advantage of all their benefits, include the plants they love in your garden plans. Allow some of your herbs to flower, and plant bright flowers like marigold and daisy varieties. The surest way to attract these beetles is by planting goldenrod, which is their favorite plant, as well as linden trees.