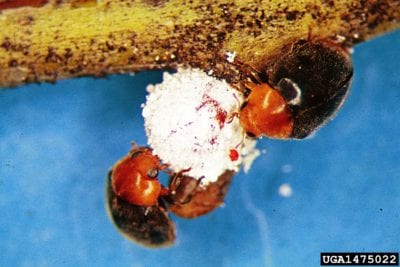 What is a mealybug destroyer and are mealybug destroyers good for plants? If you’re lucky enough to have these beetles in your garden, do everything you possibly can to ensure they stick around. Both larvae and adults will help keep mealybugs under control.

Mealybugs are destructive pests that wreak havoc when they suck the juices from a variety of plants, including certain agricultural crops, garden vegetables, ornamentals, trees, and your prized houseplants. If that isn’t bad enough, mealybugs also leave sweet, sticky waste that attracts ugly, black mold.

Adult mealybug destroyer beetles are smaller and primarily blackish or dark brown lady beetles with a tan or rusty orange head and tail. They have healthy appetites and can power through mealybugs fairly quickly. They can lay up to 400 eggs during their two-month life span.

Mealybug destroyer eggs are yellow. Look for them among the cottony egg sacks of mealybugs. They hatch into larvae in about five days when temps reach about 80 degrees F. (27 C.) but don’t reproduce well when the weather is cold or extremely hot. The larvae enter a pupal stage in about 24 days after they go through three larval stages.

How to determine which is which? Mealybug destroyer larvae are covered with waxy, white material, substantially more than actual mealybugs. They measure about ½ inch (1.25 cm.) in length, about twice the length of an adult mealybug.

Also, mealybug destroyers have legs but they’re difficult to see because of the white, curly covering. They move around a lot more than mealybugs, which are sluggish and tend to stay in one spot.

If you have a heavy infestation of mealybugs and mealybug destroyer beetles aren’t quite up to the job, don’t resort to pesticides. Instead, target-spray insecticidal soap. Do your best to spare mealybug destroyer eggs, larvae, and adults.