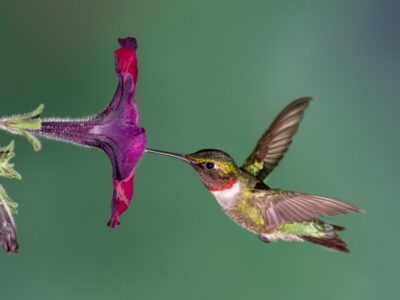 Do birds help pollinate flowers? It’s a fair question because most pollination attention is focused on bees. The plight of bees is important. They play a big role in pollination and food production, but they aren’t the only players in the game.

Bees are the most important pollinators globally. They get a lot of the attention for this reason and also because their populations are declining, putting our food supply at risk. We require pollinators to move pollen between flowers in order to get fruit production.

But birds play a role too. Bird pollinated flowers are mostly wildflowers, which are much less important from a food standpoint. In North America, there are no commercial food crops that rely on birds.

Wildflowers are important as part of the native ecosystem. The destruction of wildflower habitat by development harms birds that pollinate them, while declines in bird populations impacts the ecosystems.

How Do Birds Pollinate Flowers?

The process of pollinating flowers by birds is known as ornithophily. Flowers attract birds with bright colors and other features. When a bird stops by the flower to eat nectar, sticky pollen attaches to its beak and feathers.

That pollen-laden bird goes to the next flower, dropping off pollen and picking up more. Through this process, they pollinate flowers. Birds that eat insects off flowers also contribute to pollination.

Birds that pollinate are mostly nectar eaters. Including insect-eating birds that visit flowers, there are more than 2,000 species of pollinating birds. In North America, hummingbirds are some of the most important pollinators. In other parts of the world pollinating birds include honeyeaters, honeycreepers, sunbirds, and some types of parrots.

If you’re interested in drawing pollinating birds to your garden, choose flowers with characteristics that appeal to them:

The flowers that birds come to for feeding are open during the day. Night-bloomers attract insect pollinators and bats.