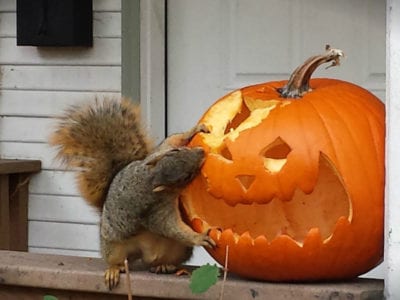 It isn’t too far off, and once autumn and Halloween is over, you may find yourself wondering what to do with the leftover pumpkins. If they have begun to rot, composting is the best bet, but if they are still fairly fresh, you can put out the leftover pumpkins for wildlife.

Is Pumpkin Good for Wildlife?

Yes, both the pumpkin flesh and seeds are enjoyed by a number of animals. It’s good for you, so you can bet all kinds of critters will enjoy it. Just be sure not to feed animals old pumpkins that have been painted, as the paint might be toxic.

If you don’t want to attract wildlife, feeding animals old pumpkins isn’t the only pumpkin use after the fall season. There are other options besides reusing pumpkins for wildlife.

What to Do with Leftover Pumpkins

There are a few things to do with leftover pumpkins for wildlife. If the pumpkin isn’t rotting, you can remove the seeds (save them!) and then cut up the fruit. Be sure to remove any candles and wax from the fruit before setting it out for animals, like porcupines or squirrels, to nibble on.

As for the seeds, many birds and small mammals would love to have these as a snack. Rinse the seeds and lay them out to dry. When dried place them on a tray or mix them in with other birdseed and set them outside.

Another method for reusing pumpkins for wildlife is to make a pumpkin feeder with either a pumpkin cut in half with the pulp removed or with an already cut up Jack-o-lantern. The feeder can be filled with birdseed and pumpkin seeds, and hung for the birds or just set out with pumpkin seeds for other small mammals to nibble on.

Even if you don’t feed the seeds to the animals, save them anyway and plant them next year. The large blooms will feed pollinators, such as squash bees and their young, plus it’s simply fun to watch a pumpkin vine grow.

If the pumpkin looks like it’s on its last legs, the best thing to do is to compost it. Remove the seeds prior to composting or you may have dozens of volunteer pumpkin plants. Also, remove candles before composting.