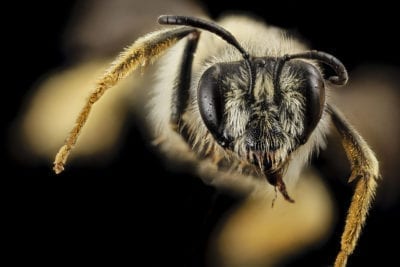 Bees collect pollen and nectar from flowers for food to feed the colony, right? Not always. How about oil collecting bees? Never heard of bees that collect oil? Well you’re in luck. The following article contains information about the little known relationship between bees and flower oil.

What are Oil Bees?

Oil collecting bees have a symbiotic relationship with floral oil producing plants. First discovered over 40 years ago by Stefan Vogel, this mutualism has evolved through various adaptations. Over the course of history, floral oil production and oil collecting on the part of certain species of bees has waxed and waned.

There are 447 species of apid bees that collect oil from about 2,000 species of angiosperms, wetland plants that reproduce both sexually and asexually. Oil collecting behavior is characteristic of species in the genera Centris, Epicharis, Tetrapedia, Ctenoplectra, Macropis, Rediviva, and Tapinotaspidini.

Relationship between Bees and Flower Oil

Oil flowers produce oil from secretory glands, or elaiophores. This oil is then collected by oil collecting bees. The females use the oil for food for their larvae and to line their nests. The males collect oil for an as yet unknown purpose.

Oil bees collect and transport the oil on their legs or abdomen. Their legs are often disproportionately long so they can reach down into the lengthy spurs of the oil producing flowers. They are also covered with a dense area of velvety hairs that have evolved to facilitate the collection of the oil.

Once the oil is collected, it is rubbed into a ball and fed to the larvae or used to line the sides of the underground nest.