Mining Bee Info: Are Mining Bees Good To Have Around 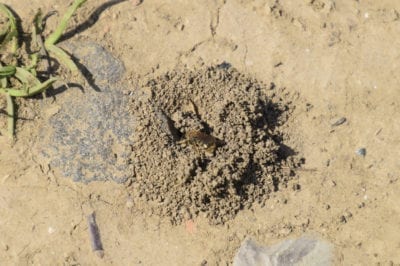 Honeybees have received quite a bit of media in the last few decades as many challenges have noticeably decreased their populations. For centuries, the honeybee’s relationship with mankind has been incredibly hard on the bees. Originally native to Europe, honeybee hives were brought to North America by early settlers. At first honeybees struggled to adapt to the new environment and native plant life of the New World, but in time and through domestication efforts by man, they adapted and naturalized.

However, as honeybee populations increased in North America and they became recognized as an important agricultural tool, they were forced to compete for resources with 4,000 native bee species, such as mining bees. As human populations increased and advanced, all bee species began to struggle for habitat and food sources, not just in North America but worldwide. Keep reading for some additional mining bee info and learn more about these important ground dwelling bees.

What are Mining Bees?

While much light has been shed on the plight of honeybees because they are highly valued as the pollinators of 70% of North American food crops, very little is said about the struggle of our native pollinating bees. Before being replaced by the honeybee, native mining bees were the primary pollinators of blueberries, apples, and other early blooming food crops. While honeybees have been domesticated and valued by humans, mining bees have faced the struggle for food and nesting ground on their own.

Mining bees are a group of about 450 native bee species of North America in the Adrenid genus. They are extremely docile, solitary bees which are only active in the spring. As their name indicates, mining bees dig tunnels in which they lay their eggs and raise their young. They seek out areas with exposed soil, excellent drainage, and light shade or dappled sunlight from taller plants.

Though mining bees may form tunnels rather close to each other, they are not colony forming bees and live solitary lives. From the outside, the tunnels look like ¼ inch (6 mm.) holes with a ring of loose soil around them, and are easily mistaken for small ant hills or earthworm mounds. Mining bees are sometimes blamed for bare patches in lawns because several mining bee tunnels may be spotted in a small bare patch. In truth, however, these mining bees selected the site because it was already sparse, as they have little time to waste clearing bare ground.

How are Mining Bees Good?

These insects are considered important pollinators too. In early spring, the female mining bee digs a vertical tunnel only a few inches (8 cm.) deep. Off of the main tunnel, she digs out several little chambers and waterproofs each tunnel with a secretion from a specialized gland in her abdomen. The female mining bee then begins to collect pollen and nectar from early spring blooms, which she forms into a ball in each chamber to feed her anticipated offspring. This involves hundreds of trips between bloom and nest, and pollinates hundreds of flowers as she diligently collects pollen from each bloom.

When she feels satisfied with the provisions in the chambers, the female mining bee peeks her head out of the tunnel to choose from the congregating male mining bees. After mating, she deposits one egg on each pollen ball in each chamber of the tunnel and seals the chambers. After hatching, mining bee larvae survive and pupate all summer enclosed in the chamber. By autumn, they mature into adult bees, but remain in their chambers until spring, when they dig out and repeat the cycle.

Mining bees can be difficult to identify. Of the over 450 species of mining bees in North America, some may be brightly colored, while others are dark and drab; some may be extremely fuzzy, while others have sparse hairs. What they all have in common, however, are their nesting and mating habits.

All mining bees form nesting tunnels in the ground in early spring, usually from March to May. At this point, they can be considered a nuisance, as their activity and buzzing can be a trigger for agiphobia, the fear of bees, in some people. In truth, bees buzz to create a vibration which causes blooms to release pollen. Male mining bees also buzz loudly around the tunnels to attract a female.

After emerging from their nests in spring, an adult mining bee only lives another month or two. In this short time, the female has much to do to prepare her nest and lay eggs. Just as she has very little time to clear ground or destroy your lawn, she also wastes very little time on interacting with humans. Mining bee females are rarely aggressive and only sting in self-defense. Most male mining bees don’t even have stingers.

While the activity of mining bees in early spring can unnerve some people, they should simply be left alone to carry out their busy spring to-do list. The springtime tasks of mining bees not only ensures their survival but also pollinates important food plants for humans, animals, and other insects.