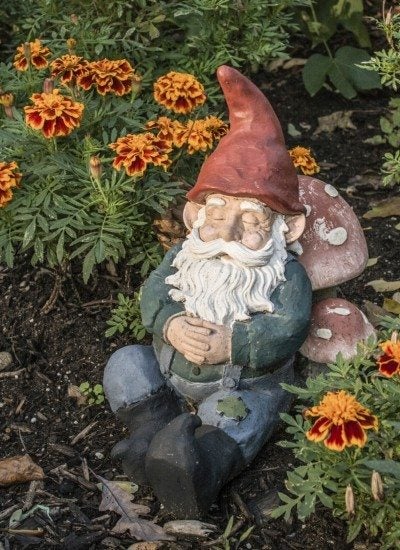 Garden whimsy is a common theme in landscapes and is captured by the addition of statues and other works of folk art. One of the most time-honored representations of this theme is through the use of garden gnomes. The history of garden gnomes is long and storied, rooted in folklore and superstition. Their rise in modern popularity can be explained by taking a look at traditional garden gnome information and their historical use and genesis. These little garden guards are both silly and important from a perspective of the past.

What are Garden Gnomes?

Garden gnomes are one of the perennial delights common to home landscapes. These small statuettes have been around for centuries and have a rich heritage in European gardens. What are garden gnomes? Garden gnomes are effigies of small, squat, little men with snowy beards and red pointed caps. They are endlessly charming and serve as garden mascots. The early history of uses for garden gnomes is rooted in legendary tales of living gnomes.

If you spy a little man less than a foot (0.5 m.) tall who is wearing outdated clothing, a red cap almost taller than the man, and a full white beard you are probably looking at a garden gnome. The first gnomes as we know them today were created by Phillip Griebel in the 1800s. However, the gnomes were also making appearances as early as the 1600s, but their appearance was quite different, less whimsical, and more totemic.

Griebel’s sculptures were made of terra cotta and appealed to the people of Germany in that period since gnome myths abounded at the time. Before long, gnomes were being manufactured by many countries and spreading throughout Europe. An interesting bit of garden gnome information is the number of names for the statue. Each region and country has come up with a different name for the gnomes which corresponds to its historical mythology.

Gnomes were a common, mystical creature who represented the earth element. They were thought to be stout, little, nature-dwelling creatures who were either mischievous or helpful, depending upon the lore.

Many stories said that gnomes could move through the soil and only went about during the night since they would be turned into stone in the light of day. The little statuettes we use today likely originated from this part of the story. The history of garden gnomes indicates that the name comes from ‘genomus,’ meaning ‘earth dweller.’ This supports the traditional tales of the gnomes being helpers in the garden, who awake at night and assist with landscape chores.

One of the oldest known garden gnomes is “Lumpy,” which was once in the gardens of Sir Charles Isham in 1847. While the garden gnome was treasured for a time in Europe, it began to have a bit of trouble in the late 1800s. In fact, professional horticultural societies denounced the practice of using the brightly colored statues in gardens.

There are numerous uses for garden gnomes in the garden.

However you choose to use your garden gnome, be warned. There are those who might see the use of the statue as slavery and choose to “liberate” your gnome. These liberators may also be up to some mischief since the practice of stealing gnomes and then taking their picture at sites of note to send back to the owner has become a popular prank.

So pick the location of your garden gnome carefully, both to keep him safe and to add a delightful surprise to your landscape.

Printer Friendly Version
Read more about Landscape Ideas
<PreviousNext>
Did you find this helpful? Share it with your friends!
FacebookTweetPinEmail
Related Articles
Newest Articles
You might also like…
Additional Help & Information