Best Outdoor Lighting To Reduce Light Pollution In Your Yard 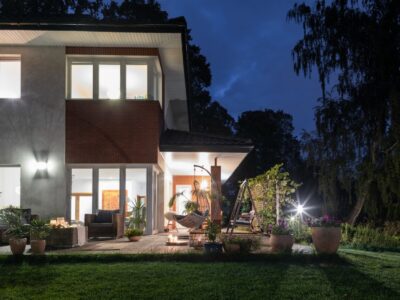 Do you ever look up at a hazy night sky and ask: What happened to all the stars? The simple answer is light pollution.

When we talk about pollution, it’s rarely light pollution, but it’s out there and it’s a problem. Light pollution takes many forms but one of the most prevalent is over-illumination in an urban area that makes it tough to see the stars. It takes away the “star light, star bright” of the childhood rhyme, costs us billions of dollars, and confuses wildlife.

It’s time to stop this harmful practice by finding ways to reduce or prevent light pollution. The first step is to read about this problem.

The primary cause of light pollution is inefficient lighting in and around buildings. This results from bad lighting design, the kind that permits artificial light to shine out and up rather than downward, where it is needed. Think street lamps, parking lot lights, exterior lights found on most homes and businesses, neon billboards and lit-up signboards.

Excess artificial lighting causes a variety of different problems. It is largely generated by use of fossil fuels, and we are all aware of the unhealthy consequences of fossil fuel reliance. Some 15 million tons of CO2 are emitted each year from outdoor lighting in this country. Consider how this impact the air we breathe as well as climate warming.

While the costs in terms of the environment are huge, the financial costs are also large. In the United States alone, light pollution wastes some $2.2 billion. This is an especially large number given that the excess lighting serves no useful purpose.

Light pollution – when a lamp is shining in your hotel window – can cause you to lose sleep. It can also throw wildlife like migrating birds off track. And some animals like sea turtle hatchlings have evolved to head toward the stars shining off the ocean which was, for centuries, the brightest light around. Now, however, they head toward the bright lights in the coastal cities to die of dehydration.

How to Prevent Light Pollution

If you are looking for ways to reduce light pollution or even prevent it, start with your own residence. Check every light fixture you have – indoors and out – to be sure it serves some important purpose. Eliminate those you can, since turning off lights is the very best fix for light pollution.

Regarding the others, change the fixtures to use fully shielded, light-efficient fixtures. These stop the artificial light from traveling up toward the sky. Consider first those fixtures that bear the International Dark-Sky Association’s Fixture Seal of Approval logo. This step alone, if undertaken across the country, could remove three-quarters of light pollution.

Printer Friendly Version
Read more about Lighting
<Previous
Did you find this helpful? Share it with your friends!
FacebookTweetPinEmail
Related Articles
Newest Articles
You might also like…
Additional Help & Information