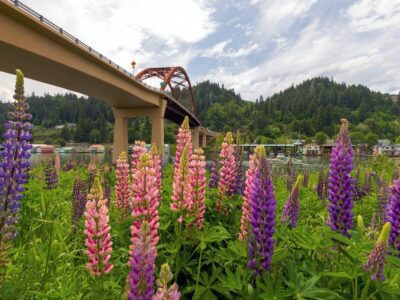 Mild year-round temperatures with plenty of moisture are the hallmarks of a good chunk of the Pacific Northwest (not all of it however). This temperate weather is a dream for gardeners, allowing them to grow almost year-round, especially if they stick to native Northwest plants and flowers. An area rich in wildlife, gardeners in this region are interested in deer resistant plants for the Northwest as well. Keep reading to learn about Pacific Northwest landscaping plants.

About the Pacific Northwest

The Pacific Northwest encompasses a large amount of varied terrain including coastal areas, rain forests, desert climates, mountain regions, prairies and pretty much everything in between. That said, the most common perception of the Pacific Northwest includes the states of Washington, Oregon, Idaho and sometimes British Colombia.

Other definitions include parts of Alaska, California, Montana, Wyoming and the Yukon Territory. That’s a lot of varied climate for one nomenclature! For the purposes of this article we are focusing on B.C., Western Washington, Oregon and Northern California.

Plants for the Pacific Northwest Gardener

Although the climate through the above region of the Pacific Northwest is notable for its mild temperatures, many gardeners find success sticking with native plants. Native plants have several benefits.

They have already adapted, often over hundreds of years or longer, to their growing conditions. This means the gardener is less likely to have to make concessions in order to grow the native plant. Not only are the plants inured to their native area but they also have built up resistance to pests and diseases. This means that native plants tend to be low maintenance as well as pest and disease resistant.

Flowering Plants for the Pacific Northwest

The goal, or at least one goal, of landscaping is to make the yard look nice, and what better way than incorporating flowering plants? Native flowers run the gamut. Some are more suited to sunny exposures and others prefer part shade to shade and moist conditions.

Deer are fickle. A deer may turn its nose up at your neighbor’s plantings but love nibbling on yours. This means that the term deer resistant should be taken with a grain of salt. The following are plants for the Pacific Northwest gardener that are less likely to attract the deer: Bellflower, bigroot geranium, corydalis, Epimedium, foxglove, Jerusalem sage, ligularia, lupine, meadow rue, and mullein are all listed as deer resistant plantings.

Lastly, most conifers, of which there are plenty in the Pacific Northwest, are safe from deer browsing with the exception of yew and Douglas fir. Damage to trees is more likely caused by deer rubbing the velvet off their antlers, which can eventually kill a tree.

Printer Friendly Version
Read more about Pacific Northwest
<Previous
Did you find this helpful? Share it with your friends!
FacebookTweetPinEmail
Related Articles
Newest Articles
You might also like…
Additional Help & Information