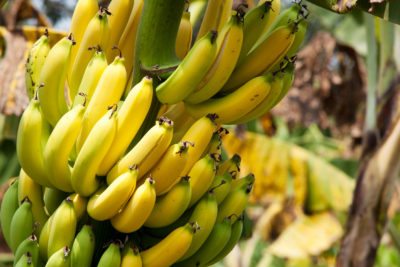 Yearning to replicate the tropical setting found on your last visit to Hawaii but you live in USDA zone 8, a less than tropical region. Palm trees and banana plants aren’t exactly the first thing that pops into a zone 8 gardener’s mind when choosing plants. Is it possible though; can you grow bananas in zone 8?

Can You Grow Bananas in Zone 8?

Information on Banana Trees for Zone 8

As mentioned, the most cold hardy banana tree is Musa basjoo, the largest of the bananas which may attain heights of up to 20 feet (6 m.). Bananas need 10 to 12 months of frost-free conditions to flower and set fruit, so most folks in cooler regions will likely never see fruit, and if you do get fruit, it is almost inedible due to the numerous seeds.

In milder areas, this banana may flower in its fifth year with female flowers appearing first followed by male blooms. If this occurs and you want your plant to produce fruit, the best bet is to hand pollinate.

Another zone 8 banana tree option is Musa velutina, also called the pink banana, which is on the smaller side but nearly as hardy as Musa basjoo. Since it flowers earlier in the season, it is more likely to produce fruit, although, again, the fruit has copious seeds that make eating it less than pleasurable.

Growing a Banana Tree in Zone 8

Bananas should be planted in full sun to light shade in moist, well-draining soil. Locate the plant in an area protected from wind so the large leaves don’t become tattered. Bananas are heavy feeders and require regular fertilization during the growing season.

If you choose Musa basjoo, it can overwinter outdoors provided it has been heavily mulched, so the same will be true when growing this banana tree in zone 8. If you are hesitant, bananas can be grown in containers and brought indoors or over winter the plant by digging it up. Once it is dug up, wrap the root ball in a plastic bag and store it in a cool, dark area until the spring. In the spring, cut the plant back to 3 inches (8 cm.) above the soil and then either pot it again or plant it in the garden once the soil warms up.