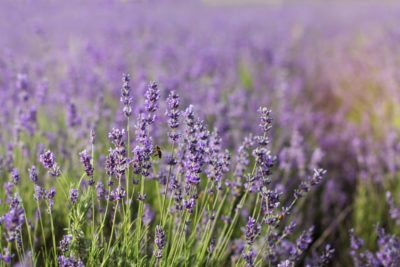 If you’ve ever walked past a border of blooming lavender, you probably instantly noticed the calming effect of its scent. Visually, lavender plants can have that same soothing effect, with their soft, silvery-blue colored foliage and light purple flowers. Lavender plants, especially when grouped together, can be reminiscent of a quaint, peaceful English countryside. With careful selection, gardeners from zones 4 through 10 can enjoy the charm of these plants. This article will specifically discuss lavender plants for zone 8.

Can You Grow Lavender in Zone 8?

For thousands of years, lavender has been valued for its medicinal, culinary, aromatic, and cosmetic properties. It has also always been regarded as a beautiful ornamental plant. Native to the Mediterranean, most varieties of lavender are hardy in zones 5-9. A few varieties are known to hold up in the cold of zone 4 or the heat of zone 10.

In warmer climates like zone 8, lavender has an evergreen, sub-shrub habit and may bloom throughout the year. When growing lavender in zone 8, it may be necessary to cut it back every year or two to prevent it from becoming too woody with age. Cutting and pinching lavender plants promotes more blooms and tender new growth, which contain higher concentrates of the plant’s natural essential oils.

English lavender and Portuguese lavender have been crossbred to produce hardier varieties of lavenders that are commonly called Lavandins (Lavendula x intermedia). These varieties are hardy in zones 5-9. Lavandins grow well in zone 8 climates. Popular varieties of lavandins are: