Plant Growing Orientation – How Do Plants Know Which Way Is Up 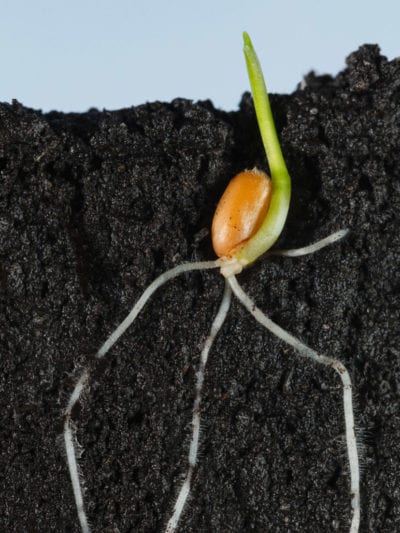 When you start seeds or plant bulbs, do you ever wonder how plants know which way to grow? It’s something we take for granted most of the time, but when you think about it, you have to wonder. The seed or bulb is buried in dark soil and, yet, it somehow knows to send roots down and stems up. Science can explain how they do it.

The question of plant growing orientation is one scientists and gardeners have been asking for at least a few hundred years. In the 1800s, researchers hypothesized that the stems and leaves grew up toward light and the roots down toward water.

To test the idea, they put a light under a plant and covered the top of the soil with water. The plants reoriented and still grew roots down toward the light and stems up toward the water. Once seedlings emerge from the soil, they can grow in the direction of a light source. This is known as phototropism, but it doesn’t explain how the seed or bulb in the soil knows which way to go.

About 200 years ago, Thomas Knight tried to test the idea that gravity played a role. He attached seedlings to a wooden disc and set it rotating rapidly enough to simulate the force of gravity. Sure enough, the roots grew outward, in the direction of simulated gravity, while the stems and leaves pointed to the center of the circle.

How Do Plants Know Which Way is Up?

The orientation of plant growth is related to gravity, but how do they know? We have little stones in the ear cavity that move in response to gravity, which helps us determine up from down, but plants don’t have ears, unless, of course, it’s corn (LOL).

There is no definite answer to explain how plants sense gravity, but there is a likely idea. There are special cells at the tips of roots that contain statoliths. These are small, ball shaped structures. They may act like marbles in a jar that move in response to the orientation of a plant relative to gravitational pull.

As statoliths orient relative to that force, the specialized cells that contain them probably signal other cells. This tells them where up and down are and which way to grow. A study to prove this idea grew plants in space where there is essentially no gravity. The seedlings grew in all directions, proving they could not sense which way was up or down without gravity.

You can even test this out yourself. Next time you’re planting bulbs, for example, and directed to do so pointy side up, place one sideways. You’ll find that the bulbs will sprout anyway, as nature seems to always find a way.