Iridescent Plants That Will Light Up Your Garden 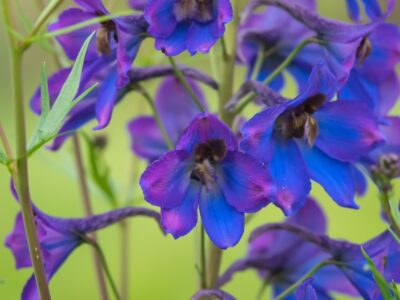 Are you looking to add a little shimmer to the garden? Plants with iridescent fruit, flowers or leaves might do the trick. These shiny plants have special adaptations to help them attract pollinators or capture more sunlight. Iridescent plants can also catch the human eye and add visual attraction to flowerbeds and houseplant displays.

Iridescence in nature is not uncommon. Japanese beetles are a prime example. These shimmering bugs have bluish-green and coppery exoskeletons that seem to shift color as the angle of light changes. Scientists aren’t totally sure why some bugs and birds have iridescent coloration. Perhaps, it evolved as a way to attract mates or distract predators.

However, scientists have learned how iridescent foliage benefits plants. Most species with iridescent leaves live in low light environments, such as tropical rainforests. The leaves of these iridescent plants have special crystal-like structure that reflect blue light. This allows the plant to absorb more of the red and green wavelengths needed for photosynthesis.

Not surprising, when these same species of plants receive more sunlight, they lose their iridescent qualities. If you’re considering one of these plants with iridescent foliage, experiment with light levels to bring out the maximum shimmer:

Plants with an Iridescent Flower

Although iridescence in flowers is not highly visible to the human eye, studies have demonstrated bees react positively to flower-like iridescence. Even though humans may not be able to appreciate the shimmer, planting these flowers can attract more pollinators to the garden:

Plants That Produce an Iridescent Berry

It’s well known that some birds are attracted to shiny items like coins and jewelry. It’s believed that iridescence in fruit is an adaptive measure aimed at increasing the area in which a plant’s seeds are dispersed by birds. Nonetheless, here are two plants which produce beautiful shimmering fruit: