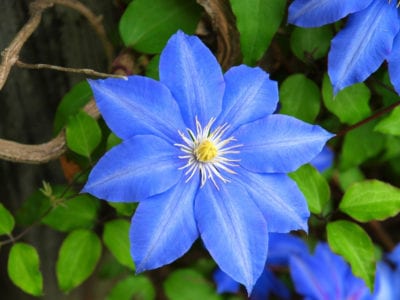 Ah, blue. The cool tones of blue evoke wide open, often unexplored spaces like the deep blue sea or the big blue sky. Plants with blue flowers or foliage are not as common as those with say, yellow or pink. While designing a blue colored garden can be a bit of a challenge, using blue plants in a small monochromatic garden lends itself to creating the illusion of depth and an aura of mystery.

To achieve this spatial illusion when designing a blue colored garden, concentrate the more brilliant, bold blue blooms at one end of the garden area and graduate, blending lighter shades at the other end. The blue garden plan will appear bigger from the bolder end of the spectrum and as such should be the area that is most used.

An overabundance of blue can seem cold and icy, so accents of purple and yellow can warm up the blue garden plan. In addition, using blue plants whose color is foliage based, such as blue spruce or varieties of Hosta, rue, and ornamental grasses (like blue fescue) adds texture and dimension to an otherwise flowery garden of blue.

When designing a blue colored garden, it is also advisable to generate interest by incorporating blue fruiting plants such as Solomon’s seal (Polygonatum), vines like the porcelain berry (Ampelopsis), and the Arrowwood viburnum shrub.

Not all members of a genus are blue, though a hint to their color might be in the species names: caerulea, cyanea, or azurea to name a few.

A ‘Not So’ Comprehensive List of Plants with Blue Flowers

Given that we have mentioned several times the relative rarity of the color blue in botany, it will come as a welcome surprise to the gardener regarding the vast number of plants available when designing a blue colored garden. The blue garden plan may include, but is not limited to, the following plants with blue flowers or foliage:

Designing a blue colored garden may also extend to the use of blue in other areas, such as the pots one plants in and blue man-made focal points, like blue glass bottle trees. Blue stone is a beautiful paving material for paths and I have even seen pavers of blue in Puerto Rico made of brick. Using sea tossed blue glass as accents or clear glass containers filled with blue tinted water for candle holders. Oh, and did I say water…? The list for designing a garden of blue goes on and on.