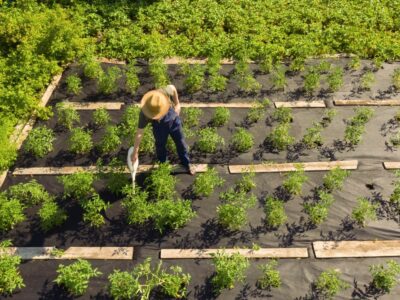 As gardeners become more invested in their vegetable plants, it’s natural to adopt various agricultural methods in order to be a greener, more earth-friendly grower. When we compare two such systems, namely permaculture and organic farming, it’s easy to see many similarities. Are these methods the same though?

In short, the answer is no. Organic farming differs from permaculture design in a number of significant ways. Before we can compare these differences, let’s first define the basic premise behind each agricultural method.

Organic farming began as an agricultural movement in the 1940’s and the word “organic” has become a labeling term to denote products which are grown or raised without the use of synthetic fertilizers, pesticides, antibiotics, and growth regulators. This movement was fostered by J. I. Rodale.

Permaculture design was introduced in the 1970’s by Bill Mollison and David Holmgren. It is an agricultural system based on nature and encompasses all aspects of human needs including food, shelter, and energy consumption.

Organic farming has become a highly-regulated industry, while permaculture has remained a grass-roots movement. In addition, many large farms have adopted organic farming, but have overlooked permaculture design as a technique primarily for the home gardener or small backyard operations.

How is Permaculture Different from Organic Gardening?

Let’s take a look at several distinct ways in which permaculture differs from organic farming:

Perhaps the biggest difference between organic farming and permaculture is the use of sustainable farming practices. Defined as the ability to meet current human needs while preserving the ability of future generations to do the same, the very core of the permaculture model is based on preservation of natural resources and conservation of the planet. However, is organic farming sustainable?