Wisdom For Today From The Famous Benjamin Franklin Almanack 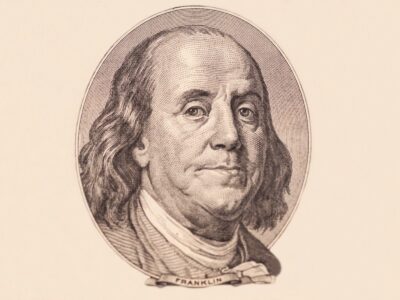 Before everyone had a computer and/or a smartphone, before there was Netflix and Facebook, people in this country perused an almanac of an evening. They were among the least expensive types of books to print, and many households owned one. Among the most famous was one called Poor Richard’s Almanack, written and printed by none other than Ben Franklin.

Almanacs contained a wealth of information, including weather guides and tips for farmers. What advice do Poor Richard’s Almanack quotes give us about gardening?

Many of us think of Benjamin Franklin as a statesman who helped steer the United States of America in its early years. But before that, he was a printer, owner and operator of the Benjamin Franklin Print Shop. His greatest business success came from Poor Richard’s Almanack, written under the pseudonym of Richard Saunders.

This almanac became extremely popular when it was published in 1733. It contained a mishmash of information. Though primarily a calendar at first, the almanac also included weather information, wise sayings, poems, and Ben Franklin quotes, often about the benefits of working hard and being frugal.

Franklin initially included many amusing pranks and lively dialogue, like poking fun at doctors (“God heals and the doctor takes the fee”) and lawyers (“A countryman between two Lawyers, is like a fish between two cats”). In the end, his use of proverbs and maxims as fillers became the book’s legacy.

In addition, Franklin offered opinions on a wide variety of topics, but ultimately, he focused on serious instruction in sciences including astrology. New editions came out every year for the next 25 years.

Franklin considered Poor Richard’s Almanack a way that common people who could not afford books could learn, a sort of literature for all. Almanacs – containing a lot of practical information – were the most read secular books in the colonies. And people loved them so much that printings ran to 10,000 copies a year, and they were even translated into French and Italian.

Although Franklin’s is perhaps the best-known almanac, it was hardly the first to appear. Different forms of almanacs can be traced back to 3000 B.C. with the pyramids, timetables, and calendars with the beginnings of astronomy.

Some of the most important types of information contained in Franklin’s almanac involved gardening. The book included weather predictions to help gardeners and farmers know when to plant their crops.

These predictions were exceptionally popular since, at that time, there were neither weather men and women, nor daily weather forecasts. That means that people looked at their almanac to find out when to plant crops and what weather to expect in spring.