Pruning Evergreens: How And When To Prune Different Evergreen Plants 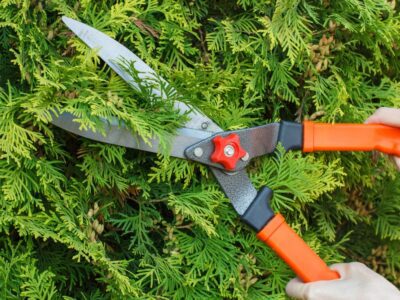 Pruning evergreens can be intimidating if you aren’t sure what to do. There are some general rules as well as specifics for certain types of evergreens. Pruning at the wrong time or the wrong way may be detrimental to the tree or shrub, or leave it unsightly.

Trimming evergreen bushes can be minimized with the selection and placement of the proper plant for the space. Before planting, choose a tree or shrub that won’t outgrow its space. Foundation plantings can quickly grow to cover windows or the porch if their height and width are not considered before purchasing.

Pruning an evergreen should be limited to removing dead or diseased limbs, maintaining its natural shape, or for trimming evergreen hedges or topiaries.

When To Prune Evergreens – Tips for Pruning Evergreen Shrubs and Trees

Once the end of summer arrives, do not prune evergreens anymore that year. They may not have enough time to harden off before winter and will be susceptible to winter injury. However, damaged, broken, or diseased wood can be removed at any time.

Pruning an evergreen can be less daunting by knowing what type of evergreen you have and learning best practices.